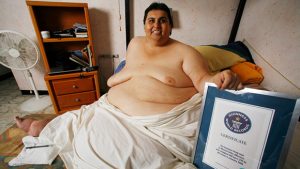 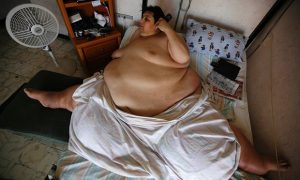 The world’s most obese man has died from a heart attack at the age of 38.

Andres Moreno, who weighed 980lbs at his heaviest, passed away on the morning of Christmas Day while he was being rushed to hospital from his home in Ciudad Obregón in Sonora, Mexico.

He suffered a fatal heart attack in the ambulance and could not be revived, his publicist said.

‘Andres died at 8.30am on Christmas Day in an ambulance from a heart attack as he was taken from his house to San Jose Hospital,’ publicist Carmen Palacios said in a statement today.

Speaking to  via telephone, Palacios added: ‘We are dismayed by the news.’

Moreno, who weighed 700lbs at the time of his death, will be buried in his home state today.

His death comes just a month after football superstar Cristiano Ronaldo reduced him to tears by sending him a signed Real Madrid shirt in a bid to encourage him to lose weight and get healthy.

At time, Moreno said: ‘I want to thank everyone, especially Ronaldo, for taking interest in my case.

‘Sometimes you think that people live in another world way from the people, but that is not the case.

‘I feel as if I had gotten a Christmas gift before Christmas.’

The signed jersey was sent to Moreno by Ronaldo shortly before the man underwent weight-loss surgery at a Mexico hospital after losing a staggering 266lbs naturally, according to .

Moreno still weighed more than 700lbs when he went under the knife. It took a team of seven staff to help hoist him out of bed and onto a reinforced stretcher so he could be taken to the hospital.

The patient had hoped to lose more than 800lbs in weight – to take him down to 175lbs – following the operation, allowing him to fulfill his dreams of finding a wife and even starting a family.

Before the surgery, he said he knew there was a risk, but that he would die if he did not have it.

He added that he hoped to set up an organisation to help other obese people get back into shape.

‘I want to show them that no matter how large they are, there is hope,’ he said from his bed.

The operation saw medics remove the majority of his stomach, around 70 per cent, and re-route a lengthy portion of his small intestine at the Mexico Gastric Bypass unit in the Arboledas Hospital.

The procedure is used to reduce meal quantities and the absorption of calories from food.

It was a last ditch attempt to save Moreno’s life after he suffered a previous heart attack scare.

The Mexican, who has always been large, was born weighing 13lbs and at 10, was already tipping the scales at 264.5 lbs. A healthy ten-year-old typically weighs anywhere between 57 to 100lbs.

In recent years, he had become bed bound due to his weight, with a number of serious illnesses.

‘I realised I was just getting fatter and fatter, going up in size like a snowball, but I couldn’t stop, I lost my wife, who I lived with me for three years, who left me simply because I was so fat,’ he said.

‘I looked so bad that when people came to see me I used to make them cry.’

In the wake of his recent operation, Moreno had managed to start washing himself again,

He had also successfully walked for the first time in three years, leaning on relatives for support.

Speaking after his feat on December 2, he said: ‘My legs were trembling like a new-born foal’s but thankfully I can stand up by myself and walk by myself.’

Moreno, a former police officer, admitted to being dumped by his wife as his weight ballooned after he turned 20, saying: ‘I lost my wife, who I lived with for three years and left me because I was fat.’

He added: ‘I realised I was putting on more and more weight and getting bigger but it was like a snowball I couldn’t stop. Friends and family would visit me and when they went I was left alone crying and sad because of my situation and begging God to put me back on the right path.

‘I hit rock-bottom when I couldn’t get out of bed and go to the toilet or wash myself.’

Surgeon Jose Antonio Castaneda, who performed Moreno’s recent operation in Arboledas on October 28, said ahead of it that the patient would not have lasted another five years without it.

He described Moreno’s death as ‘unexpected’.

Moreno was the second Mexican to claim the title of fattest man after the Guinness World Record awarded Manuel Uribe, from Monterrey, with the title of heaviest man alive in 2006.

At his biggest, Uribe weighed a shocking 1,230lbs and had been bed ridden since 2002.

Mexico has one of the world’s fattest populations.

Seventy per cent of people overweight, while a third of them are obese, figures show.

The country also suffers one of the worst rates of diabetes, which kills more than 80,000 annually.

Britain’s fattest man, 65-stone Carl Thompson, died in June just a month after pleading for help to try and change the 10,000 calories-a-day diet he was warned would kill him.