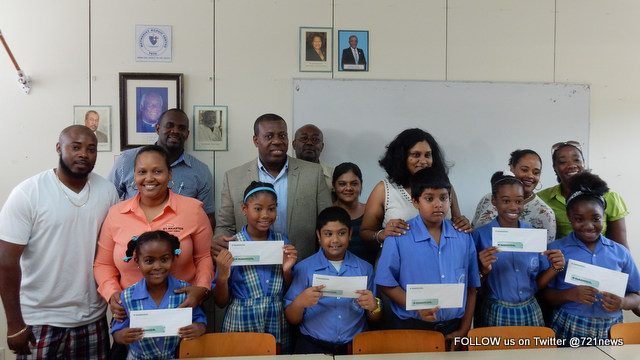 The students were the top achievers and overall the most outstanding students in their respective groups, ranging from groups 1-6, and were rewarded with a full scholarship for the next school year to cover their tuition, book list and school uniforms.

“We are very proud at Nagico to be able to reward these students for their hard work throughout the school year,” said Marketing Manager of Nagico Insurances Lisa Brown. “At the beginning of the school year last August, we challenged the students that if they were able to work hard and remain consistent, not only in their academic studies, but also in their attendance and overall behavior in school, we would reward the top student from each group a full scholarship for the next school year and we are very proud that we are now able to make good on this promise.”

Proud parents and teachers, who gathered at the school’s campus to witness the small ceremony cheered loudly and thanked Nagico for providing this opportunity to students. “We want to say a big thank you to Nagico for choosing the MAC school to host this project,” said acting Principal Nelson Higgs in his vote of thanks.

“We are very proud of our students and we hope that this will encourage them to work even harder next year,” he stated.

The Nagico Little Stars Educational Program, which is in its second year, featured the Dr. Martin Luther King School last year. According Brown, the program will continue next year and the chosen school will be announced soon.

Photo Caption: The 2016 Nagico Little Stars pose with their scholarship vouchers and are flanked by their parents and teachers at the MAC school.