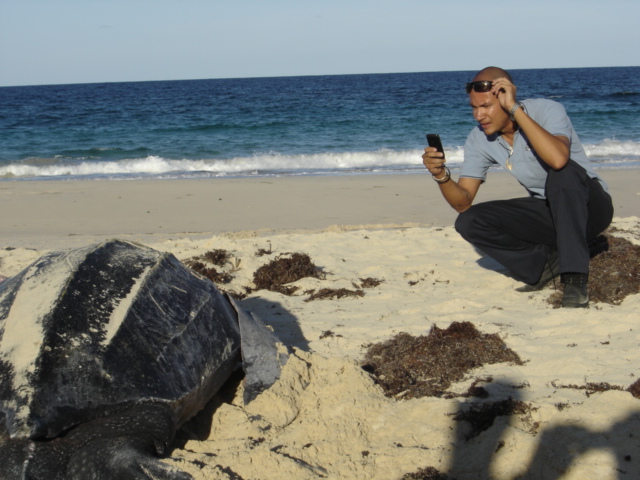 SIMPSON BAY – The 2017 Sea Turtle Nesting Season has started on St. Maarten, with the Nature Foundation recording the first two nests on Simpson Bay last week, and a third on Tuesday, April 18.

The Nature Foundation actively manages and monitors the sea turtle nesting activities on St. Maarten since 1999. Endangered Leatherbacks, Hawksbill and Green Sea turtles come ashore during the nesting season that runs from April through November each year. In order to protect sea turtles, the Foundation conducts various activities with regard to nesting, including beach surveys, nest excavations, tagging activities, and nest success research.

Sea turtles are endangered and face several threats to their existence, therefore they are protected by law. It is illegal to kill, wound, capture or pick up sea turtles, based on Articles 16 and 17 of the Nature Conservation Ordinance St. Maarten. It is also illegal to directly or indirectly disturb their environment resulting in a physical threat or damage, or to commit other acts which result in disturbance of the animal. It is forbidden to disturb, damage or destroy sea turtle nests, lairs or breeding places. Also, it is forbidden to pick up or to destroy the eggs of any species of sea turtle.

“Our sea turtle population needs major protection, especially important is the safe nesting of our females. Therefore we ask restaurants and beach bars along the major nesting beaches to refrain or limit the use of beach bonfires and artificial lighting, which can seriously reduce the survival rate of sea turtles. Beach visitors are asked to not drive on the nesting beaches and walk dogs on a leash. Beach communities in particular are in the best position to help ensure that females nest safely, that nests are left undisturbed and that hatchlings make it safely to the sea,” stated the Nature Foundation.

The Nature Foundation asks beach visitors to report any possible turtle tracks, nesting activity or illegal activity. Findings can be reported by calling the Nature Foundation’s office at phone: +1 (721) 544-4267 or email: info@naturerfoundationsxm.org.