Volcanoes are primed to erupt on a time scale of days to months rather than years, research suggests.

The study raises hopes of finding a more accurate way to tell when a volcano is about to explode, scientists at Oxford University say.

Gases emitted from the mouth of a volcano could provide clues to when an eruption is imminent, geologists report in Nature Geoscience.

They studied the dormant Campi Flegrei volcano in southern Italy.

The area west of Naples has been dubbed Europe’s super volcano.

Hidden beneath the landscape lies a sleeping volcano of immense power, which last erupted in 1538.

Geological “time capsules” from the event contradict current thinking on how volcanoes are triggered to erupt.

Crystals of a mineral from the ancient explosion show the molten rock was “primed” – or filled with bubbles of gas – only very shortly before erupting. 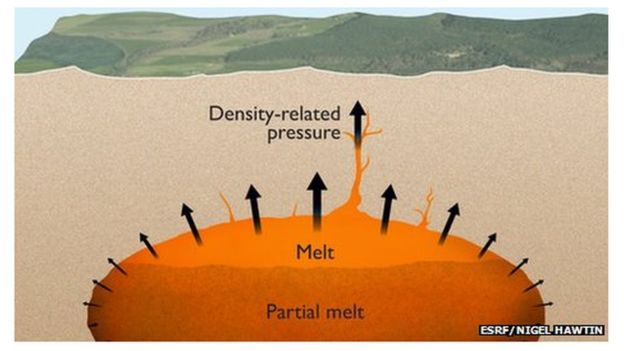 Scientists say this process should change the make-up of gases emitted at the surface of the volcano, potentially providing an early warning sign that a volcano is about to erupt.

Prof David Pyle of the University of Oxford, a co-researcher on the study, said the mineral, apatite, can be used to “forensically extract the time history” of a volcano.

“You can use it to work out one of the critical things in when a eruption is about to happen – that’s the point at which the magma body starts to become rich in gas,” he told BBC News.

“It will certainly help us think about periods when the volcano is just restless and periods when that rumbling has the potential to lead to an eruption,” he explained.

Mike Stock, lead researcher on the study, said volcanoes can be “primed” on short time scales, which will help scientists interpret the signals expected to before such an event.

“When the magma forms bubbles, the composition of gas at the surface should change, potentially providing an early warning sign,” he said.

More work is planned to try to confirm the findings.

The research, carried out with the Durham University and the National Institute of Geophysics and Volcanology, Rome, is published in the journal, Nature Geoscience.