This video was made by our Facebook friend Claudette Baly specially for 721news from Brooklyn, New york at that moment it was -2 degrees.

New York City and Long Island were under a travel ban Saturday, including all transit from New Jersey bridges and tunnels into and out of the city as a deadly blizzard left major cities, roadways and airports along the East Coast largely immobilized.

Some 250,000 customers were without power as the storm roared up the East Coast, according to the Weather Channel. 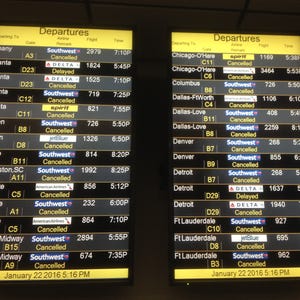 Air traffic ground to a halt across much of East Coast, with more than 10,000 flights canceled nationwide by Saturday afternoon. Underscoring the severity of the storm, all flights were halted Saturday at four of the nation’s busiest airports: Philadelphia, Washington Dulles, Washington Reagan National and Baltimore/Washington International.

Public transportation in Philadelphia, Baltimore and Washington, D.C., was also shut down as local officials called on residents to hunker down and stay off the streets for a second day.

“This event has all the makings of a multibillion-dollar economic cost,” said meteorologist Steven Bowen of Aon Benfield, a London-based global reinsurance firm. After adding up damage to homes, vehicles, businesses and more, “we’re potentially looking at one of the costlier winter storm events in recent memory,” he said.

The so-called Blizzard of 1996, which had a similar size and scope, had a $4.6 billion economic cost (in 2016 dollars), Bowen said. “No two events are identical, but this provides some context as to how costly these storms can be.” 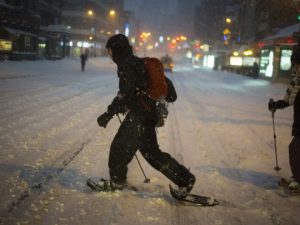 As New York City’s travel ban took effect, the National Weather Service predicted 24-30 inches of snow for the metropolitan area, putting it within range of the city’s biggest snowstorm on record, 26.9 inches received in 2006.

The order, effective mid-afternoon, shut down state highways and two major routes on Long Island. Above-ground subway stations in New York City were also being closed as the storm continued to pound the area.

Under the ban, only emergency vehicles will be allowed on the streets, and drivers who ignore the order could face heavy fines and license points, New York Gov. Andrew Cuomo said. New York City Mayor Bill de Blasio announced shortly before 6 p.m. that the travel ban, initially scheduled to expire at midnight, had been extended until Sunday morning.

In response, all Broadway matinees and evening performances for Saturday night were canceled, according to The Broadway League, the official website of the Broadway theater industry.

Asked for advice for parents whose kids want to frolic in the snow, de Blasio laced empathy with caution.

“If you want to go really quickly to someplace near your home, stay with your kids — adult supervision necessary,” he said. “This is a vastly intensifying storm and it’s slippery, it’s gusty. I, as a parent, wouldn’t let my kids out of my sight.”

‘Stay at home and off the roads’ 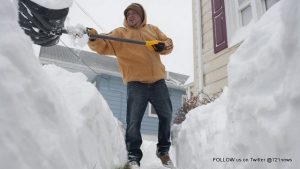 The top snowfall total from the storm so far is 40 inches in Glengary, W.Va., the weather service reported. Many locations across West Virginia, Maryland and Virginia. topped 2 feet, with more on the way.

Maryland Governor Larry Hogan on Saturday ordered the closure of a nearly 35-mile stretch of I-270 and I-70. Those roadways were to be shut down ending Sunday at 7 a.m. The closures kick in following a number of traffic incidents.

“Now is the time for Marylanders to stay at home and off the roads,” Hogan said. “This is the safe choice. It will also allow emergency services vehicles to maneuver and road crews to begin the long process of clearing highways and streets.”

On Capitol Hill in Washington, people emerged in the early afternoon to shovel their sidewalks, dig out their cars and walk their dogs. Some wore skis to get around, others dragged sleds toward the Capitol, where they could legally ride the sleds this year. But by 3 p.m., the snowfall picked up once again and visibility diminished.

Washington Mayor Muriel Bowser urged residents not only to stay off the roads in vehicles but also not to walk on the snow-covered streets. She said too many people were walking down the middle of the largely empty streets, hampering the work of snow plows and endangering themselves.

“Visibility is poor and you cannot be seen,” Bowser said. “We need you to stay home.”