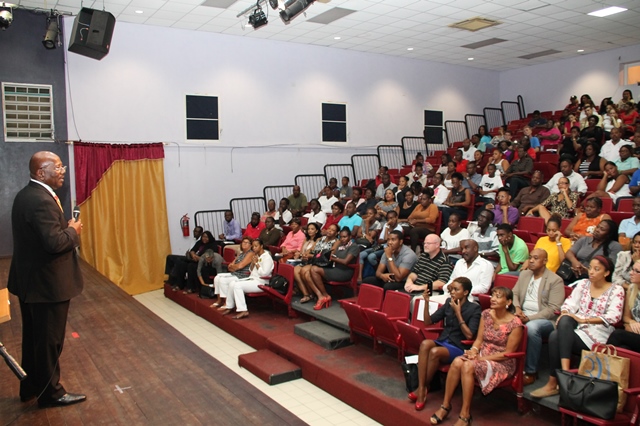 Philipsburg – Prime Minister Marlin was given the opportunity to address attendees which included parents, students and CBA’s faculty and staff informing all in attendance of his plans to assist the school.

With the plight of the academy having to relinquish their occupancy at the University of Sint Martin by October’s end, Ms. Claudette Labega of CBA’s board approached Prime Minister Marlin seeking his assistance for a possible solution.

Prime Minister Marlin stated that with the Council of Ministers and their staff being moved to the new Government Administration Building within the coming weeks, a decision was made to allow the temporary use of the upper level of the Government Building to be temporarily used by the Charlotte Brookson Academy to conduct their daily classes.

With regular classes being executed at this new location it ensures students of the Charlotte Brookson Academy continue their classes without interruptions. Prime Minister William Marlin stated alterations would be made to the various offices allowing them to be most fitting for a classroom setting.

Prime Minister Marlin also stated all other fixtures on the building needing attention will be resolved before the student’s transfer to the building.