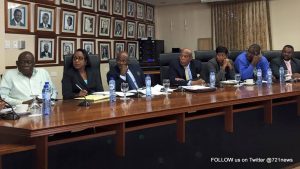 PHILIPSBURG, Sint Maarten — Prime Minister William Marlin and Minister Richard Gibson met with Chief Minister Victor Banks and his delegation from Anguilla on Monday January 11th. The purpose of the meeting was to discuss the possibility of implementing of a late night ferry between Sint Maarten and Anguilla during the peak season.

Currently, the last ferry out of Sint Maarten leaves at 10pm from the port of entry located near the Princess Juliana International Airport. Chief Minister Banks explained the urgent need for a late night ferry in order to accommodate passengers arriving on late night flights, with Anguilla as their final destination. In addition Minister Banks stated that the late night ferry would be beneficial for both countries, as many residents of Anguilla will use this opportunity so spend the evening in Sint Maarten to experience the night life.

In seeking the cooperation of Sint Maarten, the Government Officials of Anguilla requested for the immigration screening to take place at the port of entry, adjacent to the PJIA, before departure.

Minister Gibson explained that paying Immigration Officers overtime in order to facilitate the late night ferry, is not permitted due to budget cuts. However, Minister Gibson stated that if Anguilla is willing to cover the overtime costs involved, that Sint Maarten would fully cooperate.

Chief Minister Banks agreed to covering the costs of 3 hours of overtime of Immigration Officers per day, for the duration of the peak season. Based on this agreement, the last ferry will depart from Sint Maarten no later than 1am.

Prime Minister William Marlin explored the idea of having other neighboring islands make use of the extended opening hours of the entry port, in order to divide the costs involved. In addition, Department Head of Foreign Affairs, Kalila Peters discussed the possibility of creating joint Marketing Packages between Sint Maarten and Anguilla, to stimulate traffic amongst locals to experience “Sint Maarten and Anguilla” by night.

Prime Minister William Marlin came to an agreement with Chief Minister Banks to commence operations of the late night ferry between Sint Maarten and Anguilla as of January 17th until May 30th 2016, with the possibility of extending the time period based on the demand after the peak season.