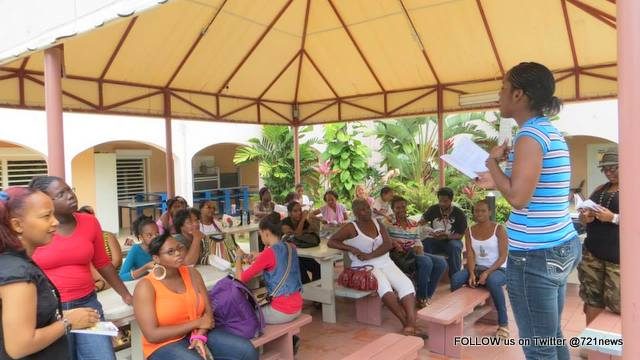 GREAT BAY – On Saturday, June 4, at 12:00pm, St. Maarten’s rising and veteran poets are scheduled to take the mic at the University of St. Martin (USM) for “Fyah Under the Gazebo.”

Now in its third year, the open mic event forms part of the annual St. Martin Book Fair organized by Conscious Lyrics and House of Nehesi Publishers. This particular segment is coordinated in collaboration with “Soualigan Fyah: Youth Poetry” and will be co-hosted by poets Sjorensly Valies and Lysanne “GoddessEye” Charles-Arrindell.

The annual “gazebo reading” provides poets with the opportunity to have their presence felt and voices heard during the third day of the book fair. “Poets from both sides of the island come to the university to take in the day’s workshops and seminars. They also come in order to share their art; showcasing their thoughts on a range of issues from the island’s culture, language, music, politics to love, frustration, revolution, family and so much more,” Charles-Arrindell said.

Poets expected to perform at this year’s Fyah event include; Magueda Jackson, Raymond Helligar, Maryland Powell, Roberto Arrindell, Anderson Percival, Lucinda “LaRich” Audian, and Tamara Groeneveldt. Other poets, including those who are guests of the book fair from abroad, will also have the opportunity to take the mic.

“Every year the energy under the gazebo is different. The first year it was very unexpected, so you had a lot of people sort of coming over to see what was happening, but the poets loved it. We heeded having an impromptu session with one of St. Martin’s premiere poets Brother Changa and all of the poets, both young and old, new and veteran felt like that moment was something special,” Charles-Arrindell said.

Last year, in the second year of the event, St. Maarten poets were joined by poets from abroad who also felt the desire to make use of the platform to share their work with audience members. “It was really amazing getting to listen to own poets and then others from away, taking the mic one after the other. It was really a learning and growing experience and one that we hope is repeated by visiting poets this year,” Valies said.

Both Charles-Arrindell and Valies said that this event has become a tradition that both poets and poetry lovers attending the book fair have come to anticipate, and enjoy and is one that they hope continues and grows far into the future.

Charles-Arrindell said that interested poets, who are sure that they want to share on Saturday, should email her at LysanneCharles@gmail.com if they want to be placed on the list of scheduled readers. Poets are also encouraged to request the mic if they are inspired to do so and if time allows.

“Each year we know that there are more poets who want to read than actual time, so we always try to schedule as many poets as possible beforehand, while still leaving room for spontaneous readings. As usual we will allow each poet a maximum of one or two poems and five minutes per turn, so that hopefully everyone has an opportunity to share their work(s),” Charles-Arrindell said.

She thanked Conscious Lyrics, House of Nehesi Publishers and the organizing committee of the St. Martin Book Fair for allowing poetry to play such a prominent role in both the prep book fair and book fair events.

“Poetry is the language of the heart. As poets we are honored to be able to partake in such an august event on our island,” Charles-Arrindell said.

Caption: Poets and poetry lovers enjoying “Fyah Under the Gazebo”