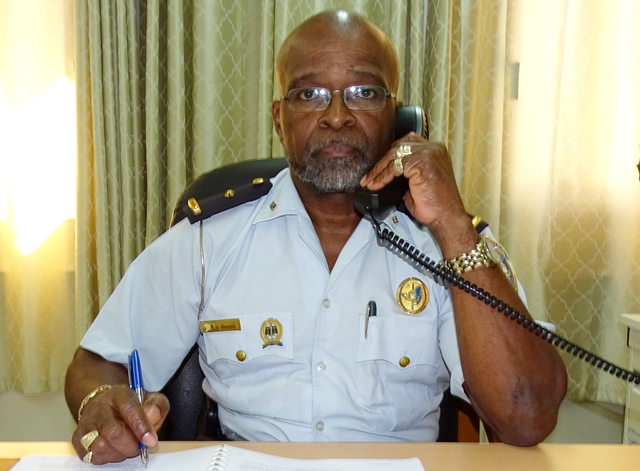 In response to the newspaper article of the Daily Herald in the edition of June 1st 2017 in which the man by the name of  Glenville Riley stated that he was attacked and ill-treated by police on Monday May 29th on Back Street and as a result of this ill-treatment had suffered injuries to his right hand the police department is responding as follow: The management of the Police force is well aware of this incident and the victim Glenville Riley has filed an official complaint with the Detective Department of ill-treatment. The officers involved in this case have turned in a written report of the entire incident. A complete and thorough investigation into this case was ordered by the police chief and all documents will be forwarded to the Public Prosecutors Office for review and evaluation, who will finally decide how to further deal with this case.

The Police Department is informing the general public that after a very in depth investigation into the bomb threat which took place on Saturday May 27th 2017, that a male suspect in this case has been arrested.

On Saturday May 27th at approximately 02.00 p.m. the Central Dispatch received a phone call informing them of a bomb being on a board of one of the “Jet Blue” aircrafts on the Princess Juliana International Airport. Immediately after receiving this call all emergency services such as Airport security, Fire department and other relevant authorities were informed of the ongoing situation.

A complete shut down of traffic go to and from the airport area and the diversion of aircrafts coming into Sint Maarten to other neighboring islands immediately went into effect. The airport building was completely evacuated. A “Jet Blue” aircraft on the ground at the time was removed from the main building and taken to secure area where all passengers disembarked and were taken to a secure area for security processing.

The aircraft in question was completely searched by a highly trained search team who gave the “all clear” sign after no explosive device was located. All employees of the airport were allowed back into the building, air traffic into island was again allowed and traffic to and from the airport area was again open.

The suspect in question with initials K.J.C. (27) was arrested without incident and taken to the Philipsburg Police Station where he remains in custody for further investigation.

The police management team is congratulating the investigating team for a swift and in depth investigation that lead to the quick identification and arrest of this suspect. It is because of their dedication and professionalism this has been solved. The investigation continues.