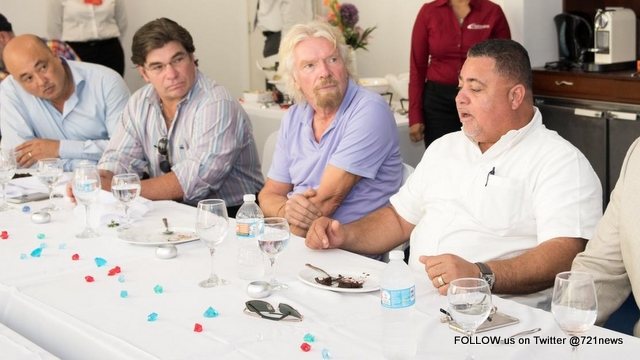 Sir Branson plans to launch his own cruise line called Virgin Cruises in 2020.  Virgin Cruises aims to deliver a unique and differentiated approach to cruise tourism for the millennial traveler.

Port St. Maarten Management Team which included Members of Parliament (MP) Hon. Frans Richardson and MP Hon. Maurice Lake from Parliament’s permanent committee for Tourism and Economic Affairs, Senior Executive from Ministry of Tourism, Economic Affairs, Transportation and Telecommunication Alex Dijkhoffz, and Chairman of the port Supervisory Board of Directors Humphrey Mezas, were part of the meeting which was held with Sir Richard Branson on Wednesday where he was informed about the current features and amenities of Port St. Maarten as well as the future plans for port development.

Sir Branson was also given a water taxi tour that left the Capt. Hodge Wharf, passed the Walter Plantz Square, Fort Amsterdam and then to the tender jetty at Port St. Maarten.

Chief Executive Officer (CEO) Mingo commended Sir Branson about his plans to venture into the cruise sector and that Port St. Maarten was looking forward to welcoming Virgin Cruises in 2020.

Virgin Group has provided the necessary capital to build the first three mid-sized ships with Italian ship builder Fincantieri.  Each ship will feature approximately 1,430 guest cabins, and host more than 2,800 guests and have 1,150 crew members on board.

The Virgin Group makes investments in consumer sectors such as Travel & Leisure, Telecoms & media, Music & Entertainment, Financial Services and Health & Wellness. Virgin Hotels started in 2015 opening its first property in Chicago, U.S.A.  For 2016, Virgin Hotels has announced plans to open a resort in Palm Springs, California in late 2018.  Hotels in Nashville, New York and Dallas are already in the works, as Virgin Hotels continues to explore opportunities in cities across the US and the globe.

The Group has approximately US$24 billion in annual revenues and continues to grow; 71,000 employees in 35 countries.  The Virgin Group actively seeks new investment opportunities and to partner with like-minded investors.

“It was a great pleasure to meet with Sir Richard Branson. He was informed about our current state of affairs as a cruise destination. He was impressed with our facilities and very interested about our plans for future growth.

“Reinventing Cruise St. Maarten is an on-going process. This meeting with Sir Richard Branson was an opportunity to inform and at the same time look at attracting additional cruise business in the future in order to grow our cruise numbers. By the end of this year, we will formalize an agreement with Virgin Cruises to call at Port St. Maarten.

“One has to be constantly on the ball in order to remain one of the destinations at the top, and Port St. Maarten is making the necessary decisions in order for this to happen in conjunction with out stakeholders who also have a very important role to play,” CEO Mark Mingo saidon Wednesday.

The visit to Port St. Maarten concluded with a luncheon at the Cruise Terminal Building for Sir Richard Branson and his delegation.