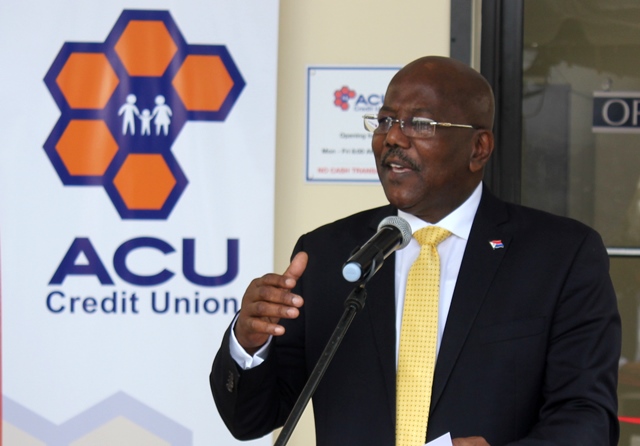 Marlin welcomed ACU to St. Maarten, and noted that, “the Credit Union will be celebrating the 55th anniversary of its founding. From the 35 public servants that began the Ambtenaren Credit Union in 1962, the ACU has grown into a cooperative with a membership of over 17,000, making it the largest credit union in the Kingdom of the Netherlands.”

In his opening remarks, Prime Minister Marlin stated: “I particularly like your motto: ‘Not for Profit; Not for charity, but for service.” That service is based on two pillars: encouraging your members to save at the highest interest rates on the market and offering them financial support through loans at the most favorable rates available.”

“Allow me here to say a few words about saving. I was raised to have respect for money; not to bad spend it; to save little pennies, because saving was a way of rejecting the banalities of the present for the pleasures of a secured future. Saving is a way of educating our children not to shun the good things of life, but to make their lives good by putting away something on a regular basis,” he continued.

“Pioneering US research scientist, Thornton T. Munger, put it best when he said, ‘The habit of saving is itself an education; it fosters every virtue, teaches self-denial, cultivates the sense of order, trains to forethought, and so broadens the mind.’ If saving is so good, then why is it that we have virtually abandoned it? Well, perhaps it is because saving demands discipline. For me and for many in my generation, that discipline began at home, with the piggy bank. Which child dared spend that dime on a candy bar when he had a piggy bank at home? Who dared break that bank before it was really full or without the permission of his or her parents? Alas, the piggy bank is no more. It has died a generational death at the hands of a reckless consumerism which values instant gratification over a guaranteed future of financial independence,” Marlin observed.

“I grew up being told that you save for a rainy day. Well, it seems as if, in spite of the hurricanes, we believe today – judging by the way we spend – that there will be no more rainy days. It was US billionaire investor, Warren Buffett who said, ‘Someone’s sitting under a shade today because someone planted a tree a long time ago.’ That is what saving is all about; planting a tree today so that many years from now you, or your children would be able to sit under a shade. The fact that ACU provides the opportunity for its members to plant trees, through their savings, which actually means they buy shares on a monthly basis and therefore own this financial institution, reminds me, somewhat remotely, of the traditional ‘susu’ or ‘padner hand,’” the Prime Minister stated.

“Who remembers that proverb that says: ‘The art is not in making money, but in keeping it.’ In other words, it isn’t how much money you earn that makes you rich, but how much of it you can actually keep. The opening of ACU on St. Maarten signals to me that we are on the right track to reviving that age-old tradition of saving. This is good for the economy. It is also good for all the members of the credit union. Your success will ultimately mean the success of our island’s economy. I, therefore, pray that you will grow from strength to strength. Congratulations on your opening!” Marlin concluded.