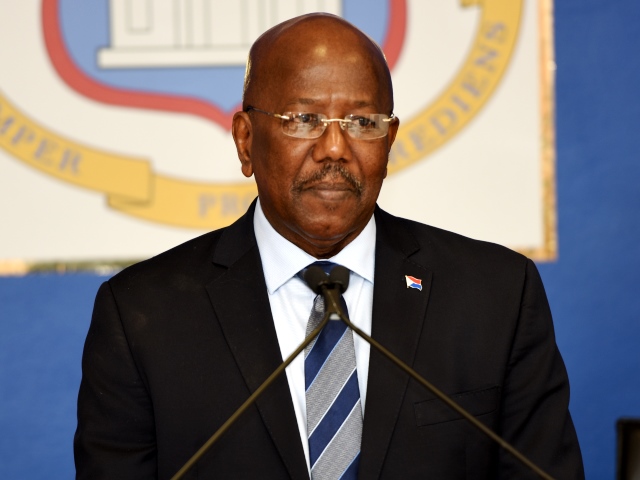 PHILIPSBURG – People of St. Maarten, a little over a month ago, we were struck by the most powerful hurricane ever recorded. We are all privileged by the grace of God to have survived that catastrophic storm which was quickly followed by another terrifying one, Maria.

We all know what transpired in the aftermath of those monstrous hurricanes and the heroic efforts of our people to pick up the pieces, dust themselves off and move on as best as they can under incredible conditions.

In the midst of this unprecedented disaster we are called to reflect today on our Constitution, which is the compilation of the fundamental organic laws that governs our country. We celebrate today the seventh anniversary of that document that sealed irrevocably the status of Country within the Kingdom of the Netherlands.

Let me stress that I know of no country in the world – sovereign or in any form of constitutional relationship with another, that got everything right within the first seven years of its existence.

To expect St. Maarten to be the exception is simply unfair. And to take advantage of our misfortune of being knocked down by a super Category 5 hurricane, with two other vicious storms in its trail in quick succession in a matter of weeks to link reconstruction aid to other issues is to unnecessarily politicize a catastrophe like Irma as if we on St. Maarten brought the hurricane on ourselves.

This is rather unfortunate. But let me state categorically here and now that those who have begun to float the idea of rolling back the autonomous status which we are marking today are in La-la-la land; they have a determined St. Maarten people to deal with.  The principles upon which our Constitution is based are irreversible and non-negotiable. Only through the expressed will of the people of St. Maarten can any changes be made to our current constitutional status.

Our constitution is perhaps the most progressive in the Kingdom, with provisions such as the Constitutional Court which none of the three other constituent countries within the Kingdom has. The guiding principles of our Constitution are summarized in its Preamble. It starts with We, the People of Sint Maarten acknowledging the Almighty God as the source of our core values.

It further states that we are resolved to work together with our partners in the Kingdom of the Netherlands, with our neighbors in French St. Martin and with all people’s of the world on the basis of freedom, equality, peaceful co-existence and international solidarity. Partnership can only be meaningful when it is based on equality, respect, and mutual benefits.

We firmly believe that nobody – no matter how well-meaning – knows what is best for the St. Maarten people than the people of St. Maarten themselves. We are grateful for all the help and assistance we have received so far from the Kingdom government and from our brothers and sisters in Aruba and Curacao, the wider Caribbean and from the United States and the world at large. This is what international solidarity is all about. We are a people that believe firmly in the principle of democracy, the rule of law, the principle of the separation of powers, the dignity and value of every individual human being and in the universal and fundamental rights and freedoms of all persons.

All these principles and beliefs have been put to the most severe test imaginable in this last month since the tragedy of the historic proportions of Irma and Maria. As in every disaster, these devastating storms brought out the best in us, and unfortunately also the worst in a few of us. The law is taking its due course as it relates to the latter group.

However, the real story in these dark days is the legendary resilience of our people who once again have shown the world that not even the most powerful hurricane in history can knock us out. In less than a month, electricity and water has been restored to about half of the island; schools have reopened, gasoline is being pumped at almost all the gas stations without rationing; banks are open again, radio stations are back on the air, and our airport is set to welcome back commercial flights on the actual anniversary of 10-10-10.

Our main roads have been cleared of the monumental debris the hurricanes left behind and life has returned to a level of normalcy in several of our districts that it became possible for us to lift the curfew completely and discontinue the state of emergency imposed after the passage of Hurricane Irma. Take a walk along Backstreet and you’ll see that business is steadily coming back while most of the supermarkets and neighborhood grocery stores and many restaurants are serving their customers as if what struck us was just a tropical wave.

By whatever yardstick you want to measure it, we are basically open for business in what some might call a miraculous way, a mere four weeks after the whole world saw images of a Paradise completely in ruins. This was possible because of the never-say-die spirit of our people.

Every one swung into action, the Police men, nurses, doctors, utility workers, community councils, truckers, civil servants, young and not so young, without waiting on the authorities.

Of course, God has been with us through it all, with Nature smiling on us by very quickly restoring a fresh, lush and beautiful green over our mountains that were laid bare by the storm’s and allowing trees and plants that were stripped naked to sprout leaves again.

It is as if Nature wants to underscore that part of the Preamble to our Constitution that states that we as a people are resolved to provide for the continuing preservation of Nature and the environment. If that is not a miracle then what is? All of this does not mean that we are where we want to be or that we’re back to Paradise again. Far from it.

There is a lot of work ahead of us. We have to rebuild our economy. We have lost about two-thirds of our hotel inventory.  Housing will be a serious challenge as so many roofs and residential and business properties have been totally destroyed. The environment itself will require special attention, even though some of our beaches have been declared safe to swim in.

Certainly, unemployment will also be a formidable challenge. Addressing these and other issues unleashed by the onslaught of Irma and Maria will require a massive infusion of funds.

Our National Recovery Plan is being finalized as we speak and I am sure these and other pertinent matters will be taken up in the plan. I know we have hardly had the time to mourn the lives we lost in the storm. I pray that their souls may rest in peace and that the families and loved ones they left behind would find the strength to bear their loss.

Now more than ever before we need all hands on deck and all minds in a positive mode as we embark on the rebuilding of our island together. Of course, we know that we won’t be able to do it alone: we certainly need help, genuine help from within and without the Kingdom.  But we will not permit anyone to exploit our tragedy to bring in Trojan horses while holding our people to a much higher standard than anyone else in the world.

Could we have done things better? Of course! But this is a country that is only seven years old, not centuries old and we should be given the time, space and goodwill to manage a crisis brought about by a natural disaster not of our own making but that may have more to do with the Carbon imprints of some of those criticizing us today. Our government remains open and accessible as our Constitution prescribes and we will continue to uphold and respect  the spirit and the letter of said Constitution.

Finally, on a day like this, I call on all the people of St. Maarten to join hands together in rebuilding a better, stronger, smarter and more prosperous island for ourselves, and for future generations. We have done it before and with God on our side, we will do it again.