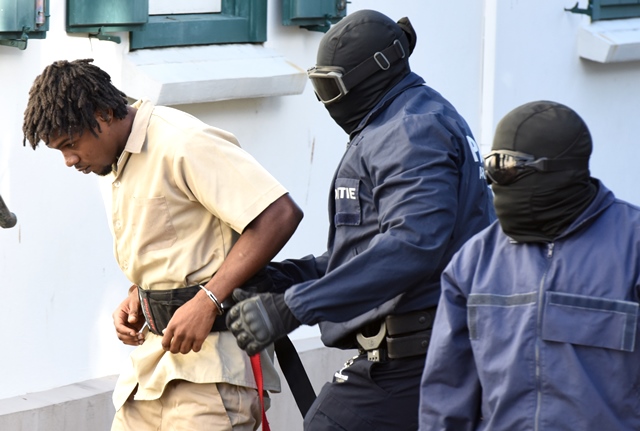 ~ Killer’s driver gets a much lighter sentence ~
Source Today Newspaper
GREAT BAY – A big smile over the face of Brendo Alberto Dixin in the courthouse yesterday afternoon after he took in the meaning of the ruling the Common Court of Justice had in store for him. Dixin was the man who drove Runald Orlando Robinson to a shopping center in Cole Bay on a fateful evening of November 30, 2015.
Robinson did not go shopping: he crossed the street, entered the Tackling gas station and shot pump attendant Saveur Gerard dead before robbing him of his money. Then he fled with Dixin to Simpson Bay, where Robinson robbed another gas station.
The Court in first Instance sentenced Dixin to 15 years of imprisonment, but the appeals court came to a completely different conclusion and sentenced him to just 4 years. After that verdict, Dixin looked like he’d just won the lottery.
Robinson was not that lucky: just like the lower court, the appeals court sentenced him to 22 years.
The appeals court ruled that Dixin did not have any knowledge of Robinson’s plan to rob the Tackling gas station, let alone that he knew about plans to shoot the pump attendant. The evidence only shows that Dixin had agreed to take Robinson to town to run some errands. Only after he heard shots, Dixin realized something was not righ.
Nevertheless he waited for Robinson and drove away with him. At most, the court ruled, that amounts to helping Robinson after the crime was committed.
For the second robbery, the court ruled that there is no evidence of close and conscious cooperation between the two men. That acquitted Dixin of complicity to this crime. And while Dixin knew after the first robbery that Robinson had a gun, he did not have it at his disposal, the court ruled. Dixin was therefore acquitted of firearm possession.
The court sentenced Dixin only for complicity to extortion – the robbery at the gas station in Simpson Bay.
The court sentenced Robinson for manslaughter, extortion and firearm possession. “In his craving for money the defendant has shot a pump attendant merciless and in cold blood in his body and his head; this way he made it easier to take money away from the lifeless victim,” the court ruled.
After the killing, Robinson drove to the gas station in Simpson bay where he also robbed a pump attendant – but this one came away with his life. “The defendant showed no respect whatsoever fort someone else’s life and he committed both crimes in the presence of bystanders.”
The court noted that the defendant’s personal circumstances do not carry any weight in this case.