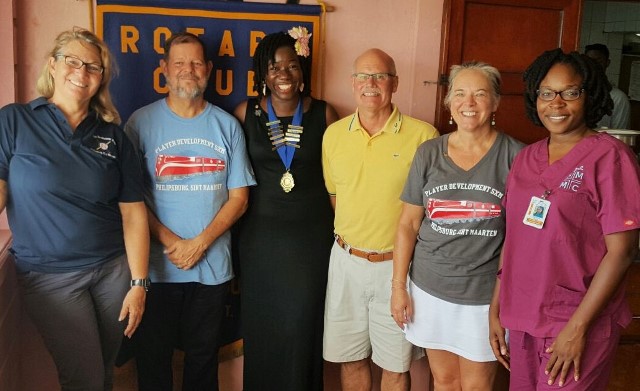 It was a beautiful morning as the Rotary club of St. Martin Sunrise met for their weekly meeting at the Gingerbread Café in Belair.

August is Rotary’s Membership Month and they held their last meeting for the month on August 30. President Okama Ekpe Brook welcomed the 22 members and guests indicating that as Rotarians, membership month is of great significance to the club. It is a time when the club seeks various ways to motivate membership and reach out to potential new Rotarians. President Okama announced that three prospective members have indicated interest in joining Rotary this month.

To complement the theme of the month, two presenters were invited to share ongoing activities within the community to promote engagement with youth. The first of the two special guests was Socrin Jeffrey, the new generation Bridge from Rotaract to Rotary Director from the sister club St. Maarten Rotary club. He spoke to the Sunrisers about the importance of helping make the transition between the Rotaract to the Rotary easier for the young Rotaractors.

He then continued to give tips on how the seasoned Rotarians can help in this decision-making for those interested in making the leap. “There are very simple things you can do such as interacting with Rotaractors so they know you on one-to-one basis. Or invite them to your club meetings so they can see how you conduct meetings and meet other members of the club,” said Jeffrey.

He was happy to see that one of the members Ruminni Rogers, was a former Rotaractor and asked him why he took the decision to move to Rotary. His answer was that he was established in his vocation, and knew that it was time to move on and help the community in more ways and that he could do that in Rotary more than in Rotaract.

The next guests were Tom and Lisa Burnett, who are originally Americans, but moved to St. Maarten and have been residents for over 25 years. They run the Player Development Program at the Little League Baseball field. Tom explained how his motivation for the program is to pull children off the streets and take that energy for them to learn not only for sports, but also have a safe haven where they can read and show their creativity.

He then spoke about the amazing trip to Niagara Falls, Canada, that he and his league had recently undertaken thanks to the invitation of Rotary club of St. Catherine’s, Canada. The Player Development Program received a visit from the Vocational Training Team from Canada in 2015. Their team tour of St. Catherine’s was a reciprocal visit. Members of the St. Catherine’s club and team leader of the visit, Lezlie and Bob Murch attended the meeting that morning as well.

Lezlie Murch is the owner of the Niagara Tennis Academy and as a Rotarian, has been instrumental in the support for sports development. The foundation had gotten several local sponsors making this once in a lifetime experience possible. Some of the 10 children had never left the Caribbean, and had to get their first passports to participate in the trip. While visiting Canada, they went to many spots including the baseball games with the professional Blue Jays national team of Canada, the monstrous aquarium, the famous Niagara Falls, CN Tower and bird kingdom. The sweet stories that he told about the experiences of the children touched many a heart at that meeting.