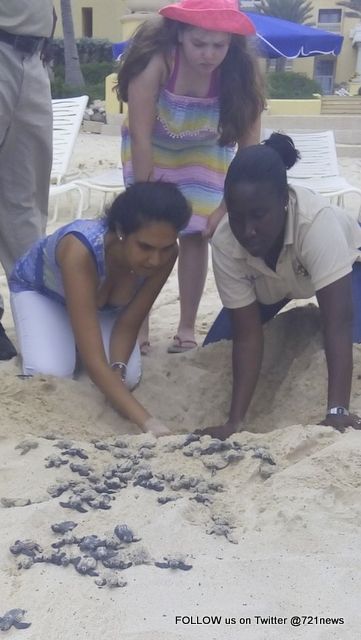 PHILIPSBURG, Sint Maarten — The St. Maarten Nature Foundation has recorded a moderately successful Sea Turtle Nesting Season for the 2015 period. From May to November three species of Sea Turtles come to lay their eggs on local beaches, one of the few places in the region were this actually occurs. This year, because of the large amount of Sargassum Seaweed, beaches with a normally high volume of Sea Turtles such as Guana Bay and Dawn Beach nested primarily on Great Bay Beach. This is an issue for the turtle nests since Great Bay has significant issues with Coastal Development, beach recreation and artificial lighting:

“This year we have had a total of 13 nests, with a total of 710 confirmed hatchlings of all three species (Hawksbill, Leatherback and Green) so far. This year we had to transport nests which were laid on Great Bay Beach because they were laid too close to beach stands or we knew that they would have been affected by artificial light. We were also called out on numerous occasions to sea turtles hatchlings which were disoriented because of artificial lights from town. This shift in nesting is more than likely caused by the large amount of Sargassum Seaweed which piled up on the usual nesting beaches,” commented Tadzio Bervoets of the St. Maarten Nature Foundation.

The Nature Foundation also commended especially the security staff at the Westin Resort who were instrumental in assisting with the successful nesting of sea turtles this season; “We are very grateful to the security staff at Westin for their help this year. They have successfully helped a few hundred sea turtles return to the ocean and are true turtle guardians,” continued Bervoets.

Sea turtle population numbers have plummeted to dangerously low numbers throughout the past century due to human impacts, bringing many species close to extinction and causing them to be listed as critically endangered. In order to reverse this trend, all sea turtle species are now protected by international laws and treaties as well as local laws. Based on ARTICLE 16 and 17 of the Nature Conservation Ordinance St. Maarten it is illegal to kill, wound, capture, pick-up, have animals that belong to a protected animal species, to directly or indirectly disturb their environment resulting in a physical threat or damage to the fauna or to commit other acts which result in disturbance of the animal. It is also forbidden to upset an animal belonging to a protected species, to disturb damage or destroy its nest, lair, or breeding place, as well as to take the nest of such an animal. Also, it is forbidden to pick-up or to destroy the eggs of animals belonging to a protected species.