He showed up for a rematch Saturday, this time with a full-court press. It included fellow officers and one especially large backup: 7-foot-1 Shaquille O’Neal of NBA fame.

White, a Gainesville Police Department officer, gained popularity when a video emerged showing his response to a noise complaint about youth playing basketball “too loudly.”

In the police dashcam video posted online Thursday and watched 14 million times, White is seen pulling up at the neighborhood to address the noise complaint.

But instead of scolding the kids or breaking up the game, he joins them.

“We’re going to let kids be kids. We are going to focus on the ones that commit crimes. #HoopsNotCrime,” the police department said in the Facebook post accompanying the video.

After the game ended, White told the kids he’d return with his own team for a rematch.

He kept his promise Saturday, when he pulled up with a group of fellow officers.

“Told you I was gonna bring some backup, right? You guys ready?” he asked the kids.

“Look at these big guys I brought. You sure you can take them?”

O’Neal then emerged from the SUV to stunned cheers, his large frame looming over the officers in uniform.

“Girleeee!” one young man exclaimed as the NBA legend walked toward the street court.

O’Neal expressed interest in playing in the rematch after watching the video of the officer’s response to the noise complaint, according to the police department.

“These kids will never forget the day Shaq rolled up to their house to play ball,” the police department said in a statement. 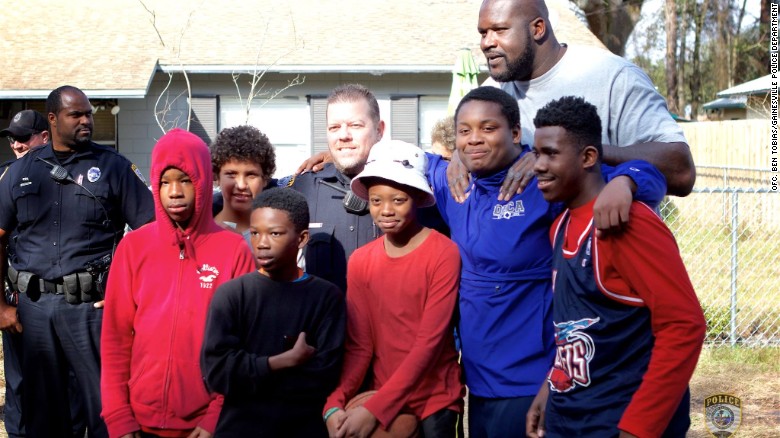 Shaquille O’Neal poses with a group of neighborhood kids in Gainesville, Florida.

In addition to scoring points during the game, Shaq scored points off the field as well.

He doled out hugs and fist bumps, and urged the kids to work hard to achieve their dreams.