Home 721news SHTA and Dept. of Labor look back at successful Job Fair 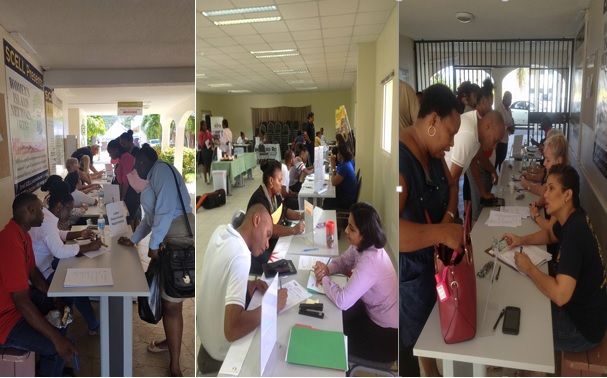 PHILIPSBURG – This Saturday, October 29, the St. Maarten Hospitality and Trade Association (SHTA), in collaboration with the Department of Labor Affairs, held the 2nd St. Maarten Job Fair at University of St. Martin (USM).

The reach of this year’s job fair extended to over 30 St. Maarten organizations submitting vacancies, as well as over 130 job seekers putting their résumé either on location or digitally.

According to the organization, it is not just those numbers that will make up the success of the event.

SHTA board member Ricardo Perez said, “In our eyes, what will decide the success of the event in the long run, is the amount of successful matches we will have created between attendees looking for a job and our partners. Last year’s event led to over 30 new jobs. As we learnt at the end of the event, the companies putting effort into providing stands at the fair were very enthusiastic about the quality of the participants this year. So we are hoping to have contributed to getting even more people finding their dream job or first opportunity in their careers this year than we did in 2015.”

In order to get as many job seekers to work as possible, the organizing parties try to reinforce the event every year by adding new elements. This year, SHTA reached out to their fellow labor organizations in the Unions to be present to share their opportunities and services in improving the St. Maarten labor market, as well as all the labor agencies on island. Next to this, SHTA deliberately looked abroad this time to fill vacancies requiring higher education with students finishing their studies in, for example, the United States or the Netherlands.

Another expansion of this year’s project compared to 2015, was that of reinforcing working with digitally tracking both résumés, candidates and figures. “By tracking the matches this time, we want to keep assisting those people actively seeking a job on our island. If a combination of employer and employee might not work out directly, we want to create new combinations as soon as possible. Paradoxically, St. Maarten has a high youth unemployment rate, but SHTA members and our societal partners are often looking for jobs. Our aim is to continuously fit St. Maarten jobs with right candidates, so organizations need not look abroad for filling vacancies while we have such a large talent pool available – either directly on island or temporarily studying in another country. Next to the match tracking, the data the event produced allows us great insights in the St. Maarten labor market at large,” stated Perez.

Another novelty this year was further diversification of types of participants. Next to the labor unions and labor agency LinQ, the Coast Guard was represented by a full patrol, while Dreams Art Gallery was a popular employer-to-be for the more creative job seeker.

SHTA and the Department of Labor Affairs extended thanks to: La Vista, Westin, Sonesta Hotels, Divi Little Bay resort, Oyster Bay Beach Resort, WIFOL, WITU, Windward Roads, Prime, NIPA, Domino’s, and various other organizations assisting either on location or behind the scenes or sending in vacancies. SHTA and Labor Affairs also thanked USM for hosting the fair as well as providing additional job trainings during the event. The organizing parties also thanked Domino’s for providing a pizza restaurant on site.

SHTA looks forward to further expanding the event in its third edition. “Various organizations could not participate in this year’s event, but are already eager to participate next time. Due to the current budget restraints, we understand that government could not offer too much vacancies, but we hope that next year’s economy allows providing even more jobs for St. Maarten job seekers. In the meanwhile,  SHTA and the Department of Labor Affairs will keep reaching out to new partners as well as candidates both on island or studying abroad to send in vacancies and resumes,” Perez concluded.

Candidates and organizations interested to either support or participate in the project can contact SHTA’s helpdesk at info@shta.com.

Source: 721 News SHTA and Dept. of Labor look back at successful Job Fair