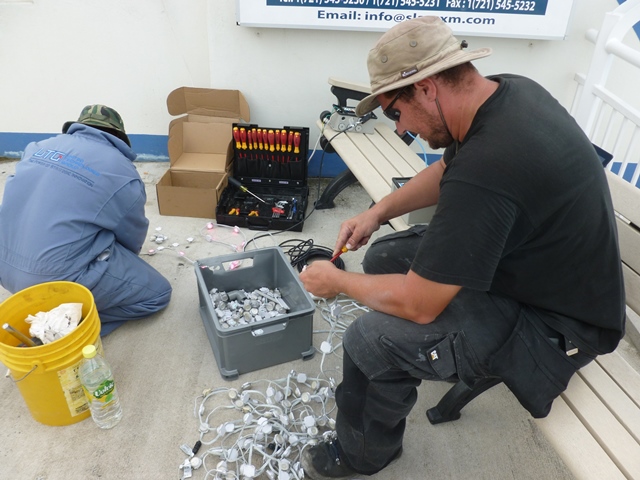 PORT ST. MAARTEN – Technicians expect to have the LED lights on the Simpson Bay Causeway fully operational within the first quarter of 2017.  Weather, hurricane related and frequent power outages have taken a toll on the lighting system at the Causeway leading Port St. Maarten Management to look at options to mitigate especially the electrical challenges due to power outages.  The sensitivity of the system has been adjusted due to the frequent electrical power outages.

The Simpson Bay Lagoon Authority (SLAC) has invested in additional UPS power supply/surge protection system.  The LED lighting system on the Causeway is a unique system due to the size of the bridge, and therefore the lighting system was custom made.

The Swing Bridge on the Causeway is 220 feet long and weighs 450 tons.  The Causeway has a total length of 2493 feet and features a two-lane motorway, a bicycle track, footpaths and two round-a-bouts at the Airport Road near the end of the runway and at Union Road near the border.

Several persons traveled back in February 2016 to the U.S. State of Massachusetts, where they were trained in Philips Color Kinetics lighting solutions based on LED technology.

LED lighting technology offers inherent advantages which require careful control and optimization.  At Philips Color Kinetics, a comprehensive approach to LED lighting is taken that goes beyond luminaries to encompass all key areas of LED technology.

Royal Philips, the parent company of Philips Color Kinetics, is the global leader in lighting.  Once the lighting system is fully operational in early 2017, the remotely programmed tunable lights that produce dynamic and subtle colorful effects can be used to reflect special occasions.

Upon their return from the training, between February and June 2016, the technicians assessed the damage and developed a plan of action which has been in execution since July.  The lighting system should be fully operational within the first quarter of 2017.