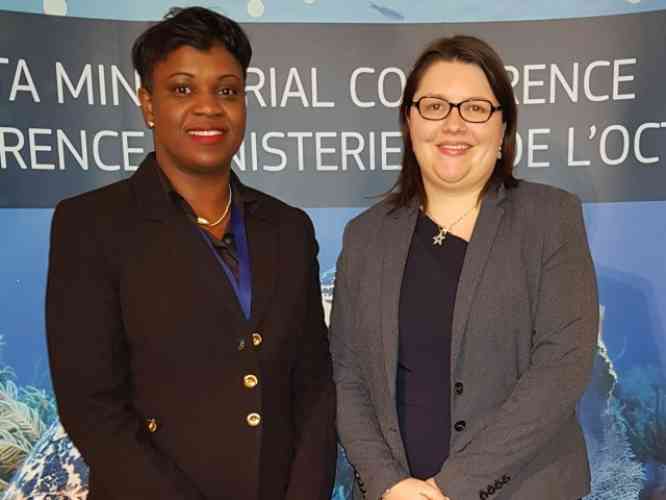 BRUSSELS – In what can be considered a very productive day in Brussels, Prime Minister Leona Romeo Marlin successfully addressed the OCTA Ministerial Conference on Post 2020 relations with the EU. While Carol Voges was re-elected for a second 1 year term as President of the OCTA Executive Committee.

During the morning session Prime Minister Leona Romeo-Marlin when given the floor made an address/intervention on behalf of the Government of St. Maarten; here is an excerpt from that address to the OCTA Ministerial meeting.

Madame Chair, today’s discussions mark an important juncture in   EU – OCT relations. I say this because we are finally moving passed the preliminary stage of “What” will the post 2020 framework entail and have now entered the critical stage of “How”. This involves giving substance to the post 2020 discussion by sharing our positions regarding the post 2020 proposed options with our colleagues here today, as well as with the European Commission at the EU-OCT Forum tomorrow.

This experience has highlighted certain aspects of our associated status to the European Union as OCTs which need to be addressed. The majority of citizens in OCTs are by law European citizens and belong to the EU family. However, as OCTs are not an integral part of the EU, Sint Maarten, similar to other OCTs were not able to access certain funding put in place to support EU countries in times of crisis, such as in the case of a natural disaster.

Notwithstanding, Sint Maarten is of the opinion that many of the priorities outlined in the proposed EU-Caribbean compact are in line with our own future regional cooperation aspirations. Therefore, we would appreciate the opportunity for OCTs to be included in the process and heard during the ongoing negotiations between the European Commission and the ACP group. The importance of regional cooperation for Sint Maarten becomes even more evident given our shared border with Saint Martin, an Overseas Region of France. During our discussions on developing a joint project with our direct neighbor, it has been apparent that for cooperation to be successful in an EU context, attention must be given to simplifying procedures and regulatory issues. This applies to programming primarily as regional cooperation between countries that are required to follow contrasting EU programming regulations often leads to lengthy and cumbersome processes with risk of disengagement of funds or worse, unsuccessful actions.

Madame Chair, it is Sint Maarten’s position that the time has arrived for OCTs to let their voices be heard with a view to redefine their relationship with the EU to that of one that better takes into account their distinct needs and challenges in the ongoing dynamic global framework.

Following the presentation of the address many of the Caribbean OCT leaders present congratulated Prime Minster Romeo-Marlin on her delivery and even requested copies the speech.