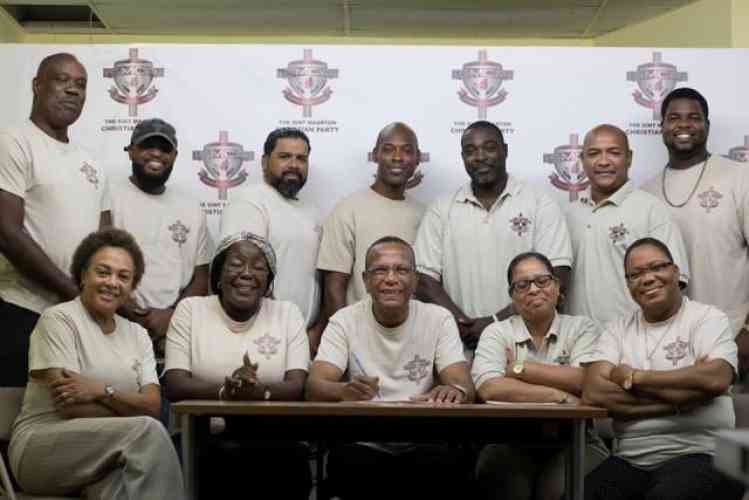 On January 30th 2018, candidates of the Sint Maarten Christian Party (SMCP) gathered at the Party’s Headquarters in the Backstreet for their usual Tuesday evening meeting. However, on this night, these loyal and enthusiastic candidates were going to do something that had never been done before by a political party or its candidates. The candidates, all of them prospective members of parliament, agreed, that when elected, they will submit a motion in Parliament, to lower the salary of parliament members by 15%.

The SMCP’s prospective parliamentarians are of the opinion that, given the financial predicament that the country finds itself in during the period of post-hurricane Irma, members of parliament ought to be sympathetic towards our citizens who are suffering and in a symbolic gesture of empathy should demonstrate their care and concern for the people of Sint Maarten. By agreeing to reduce their salaries, MPs would be saying “we understand your hurt and pain and this is the least that we can do to stand with you”. The soon-to-be SMCP MPs are hoping that parliament will even agree to make the reduction even higher.

However, in the event Parliament does not pass the motion to reduce the MPs salaries by 15%, then all the SMCP MPs agree that they will voluntarily give 15% of their gross salary to a social-cultural Foundation, established for the purpose of administering these funds. SMCP’s MPs can recommend to individuals and/or families in need that they apply to the Foundation for financial assistance. Neither SMCP board members nor its MPs may be on the board of this Foundation. The SMCP MPs have also pledged to donate 5% of their salary to help build up the campaign funds of the Party.

In addition to the lowering of the MP’s salaries, the SMCP has also included in its Manifesto the reduction of the severance allowance of MPs. According to the Pension Regulation of Sint Maarten concerning public officials, Members of Parliament and Ministers, are entitled to a severance allowance commensurate to the period that they held public office with a minimum of one year and a maximum of two years. However, this ruling is not applicable to parliamentarians or ministers, over the age of 60, who do not take up office again in the new Parliament or Council of Ministers.

Come to think about it, theoretically tax payers can be paying up to two sets of parliamentarians (current and inactive) and up to three ministers of a particular ministry. For example, we have just had the William Marlin Cabinet. This cabinet was recently replaced by the interim cabinet of Leona Marlin-Romeo. If, after February 26th the Marlin-Romeo Cabinet is replaced by a new Cabinet it is very well possible that some or all of the current ministers may be replaced. In this case then, the ministers who are inactive are entitled to a severance allowance commensurate with the period that they served.

Given the tough financial and economic times that Sint Maarten is currently facing, our people will be called upon to make certain financial sacrifices. The SMCP is of the opinion that parliamentarians and ministers should also be asked to make sacrifices. SMCP believes that our MPs should set the example. Once the SMCP obtains seats in Parliament, its MPs will present a motion to reduce the severance allowance as well as the severance period for persons who have held public office but who are no longer active in that office.

The lowering of the salaries of MPs was an objective that was already discussed by the SMCP when it was preparing for the 2016 elections. Even though it was not specifically spelled out in the Manifesto, SMCP did express great concern about the amount of money that was not being spent wisely by Parliament. Under the chapter called “Raising the Bar in Parliament”, SMCP proposed to apply cost cutting measures in the areas of MP absences and travel abroad.

SMCP is willing and able to effect change and make a difference in Parliament and consequently in Government. We are therefore asking you, the people of Sint Maarten, to give us the seats we need to bring stability in Parliament and continuity in Government. So give the Sint Maarten Christian Party a chance to show that it can govern this country and serve you for a change, based on the party’s principles of integrity, transparency and accountability and honest.