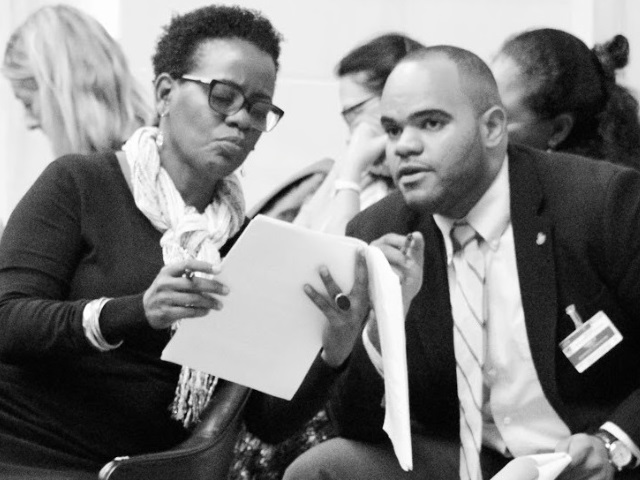 GENEVA, Switzerland – A delegation consisting of Secretary-General of the Ministry of Public Health, Social Development and Labor Joy Arnell, and Senior Policy Advisor at the Department of Foreign Relations Patrice Gumbs Jr., defended St. Maarten at the recently concluded hearing of the Committee on the Convention for the Elimination of All forms of Discrimination Against Women (CEDAW).

In her opening remarks Arnell underscored the work that St. Maarten has carried out during the last six years, as a newly autonomous country in the Kingdom. A large part of this six-year period has been dedicated to ensuring that all international legal obligations and legislation in support of obligations is put into place.

In these past six years St. Maarten has not only broadened its legal definition of human trafficking, but also enacted anti-trafficking as well as anti-smuggling legislation. In addition, St. Maarten has been elevated from tier 2 Watch List to tier 1 in the US Trafficking in Persons Report of 2016.

This reclassification underscores St. Maarten’s strong commitment to combat and mitigate incidences of human trafficking. The five-hour hearing continued with questions being posed by representatives of the 23-member committee on a number of topics including the state of prostitution and abortion on St. Maarten; teenage pregnancy; domestic violence; the role of women in governance; discrimination, immigrant and minority rights; and social security and legal protection. Particular emphasis was placed on prostitution and abortion, as both of these topics presented concerns for the Committee in previous hearings. To that end, Arnell indicated that legislative reviews were ongoing in this regard.

CEDAW is an international treaty adopted in 1979 by the United Nations General Assembly, and broadly speaking, can be defined as an international bill of rights for women. The Kingdom of the Netherlands, one of 189 countries to have signed on to the Convention, did so in 1980 and ratified it in 1991. Countries who have become party to the treaty (States parties) are obliged to submit regular reports to the Committee on how the rights of the Convention are implemented.

During its sessions the Committee considers each State party report and addresses its concerns and recommendations to the State party in the form of concluding observations. This marked the first time that St. Maarten contributed and defended its own report to the wider Kingdom report.