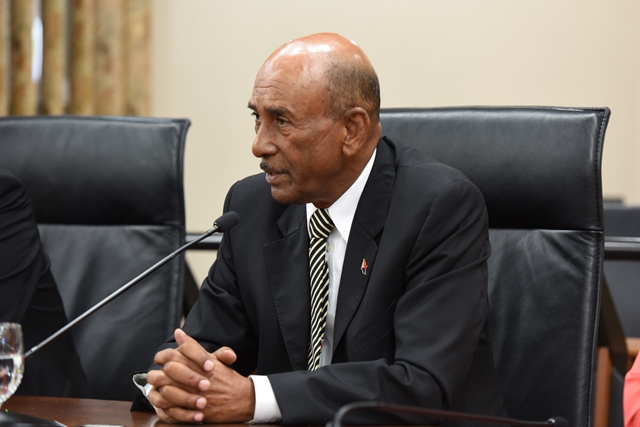 PHILIPSBURG, Sint Maarten — It’s a bitter sweet moment for the finances of the Government of St. Maarten.  The same week Minister of Finance Richard Gibson announced that the government has received dividends from the Central Bank, he also notified the public that the Dutch Government, under advice from the financial supervisory council (CFT) has prohibited St. Maarten from borrowing this fiscal year due to a fall in government revenue projections.

In the same breath, Minister Gibson noted that the arrangements with casinos on the island as it relates to paying outstanding casino taxes, has also been progressing well. “According to reports I have received from the Island Receivers (the casinos) have paid down substantially on their arrears and have all signed agreements for monthly payments going forward,” Gibson said.

However, based on an advice from the CFT, the minister said the Dutch Government has now rescinded St. Maarten’s permission to borrow this fiscal year. “The letter written by the CFT to the Kingdom Government is one that I do not support, I do not agree with. They do not take into consideration information that we have provided including the expectation of the payment of the dividend of the Central Bank,” Minister Gibson said.

He added that there should be a windfall from water reserves from GEBE, which should bring in another 17 million guilders in income for the government. He said the CFT disregarded this information notwithstanding this information.

Minister Gibson disagrees with this move by the Dutch Government and said he has mixed feelings about the whole ordeal. He disclosed that even though the government removed the permission for the country to borrow for the remainder of this fiscal year, the Dutch government has extended the timeline for St. Maarten to repay a 26 million guilders debt to roll over from when the island became a country in 2010.

“Instead, (Dutch government) offered to extend the existing 26 million guilders loan for a period of seven years for an attractive interest rate of 0.5% and for the first two years no payments. As of the third year, however, there will be per anum, an approximately 5 million guilders that we would have to pay down on that loan to be able to pay it off for seven years,” he explained.

According to Gibson, the interest rates on this new repayment term of this debt, is attractive and 7obligates St. Maarten to remain disciplined to repay this debt.