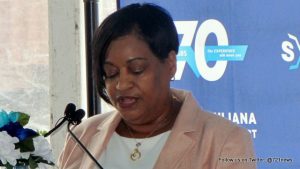 Philipsburg, St. Maarten – When an extraordinary general meeting of shareholders was held early in the morning on Wednesday, November 11, 2015, St. Maarten Day, to decide the fate of the managing director of the Princess Juliana International Airport Operating company, PJIAE NV, only a few people had know how the airport structure is. That meeting was chaired by attorney Richard Gibson Jr. who is a member of the Supervisory Board of Directors of the holding company, PJIAH. 721 News has learn that the only other person present at that meeting was Mr. Joe Peterson.

Peterson is usually called “caretaker” of PJIAH. He normally function as its managing director and has his office at his home. Who are the other members of the board of directors of the Holding company which owns 100% of the shares of the Operating company?

According to our research, 721 News can say they are: Dexter Doncher, Ludwig Quenniche and Michel Hodge who is the chairman of the board of the Holding company. Quenniche and Hodge are also members of the Supervisory Board of Directors of PJIAE NV, the Operating company. Other members of this board are: Gary Matser (chairman), Whitfield Vlaun, Cleavland Beresford, and Melinda Hoeve. They are appointed for three years and can be re-appointed after that.

Reliable sources say the chairman of the Supervisory Board of Directors of PJIAE NV, the Operating company, Gary Matser, refused to comply with the request of now ex-Prime Minister Marcel Gumbs to have the managing director, Ms. Regina Labega removed from her position.  That is why the Holding company came in to do the job.

According to Labega’s lawyer, Cor Merx, the government had done decided not to impose any penalty on the company if Ms. Labega remained in office after the 8 weeks they had to remove her. Merx also said there is a possible conflict of interest concerning the role of attorney Richard Gibson Jr. whose law firm represented government. Gibson Jr. was in court, according to him, not as a lawyer but on behalf of the Supervisory Board of Directors of the Holding company of which he is a member. However, Merx said Gibson Jr. asked for the court hearing to be behind closed doors.

721 News understands that Gibson Jr. sat with the lawyers from his firm who were defending government in the case Labega against the Prime Minister, (not the Holding company) in which she wanted the court to ask the Prime Minister to suspend all action until her appeal against the screening result have been heard.

Gibson Jr. was also the chairperson of the “extraordinary general meeting of shareholders” that pass the resolution to suspend Labega for three months with effect from Friday, November 13, 2015. He was also the one who called her while she was on sick leave to tell her about her suspension. According to reports, Labega is still on sick leave.

Reports reaching 721 Newsroom and reactions on social media show that the general public is very angry at how Labega was treated. Some say this is not in the best interest of the company because of her numerous international connections. Others question why is it members of the Supervisory board of directors of both PJIAH and PJIAE NV are not screened even though they have the same access to all information and the security areas at the airport as the Managing Director.

A group of concerned citizens told 721 News that the action of the board of directors may be illegal because it goes against a motion which Parliament had passed asking that no director of any government owned company should be hired or fired after they gave government a vote of no-confidence.

Meanwhile, MP Silvio Matser of the coalition of eight has called for the members of the boards of SXM Airport to resign. However, nobody knows if they will do so because they had already defy Parliament.