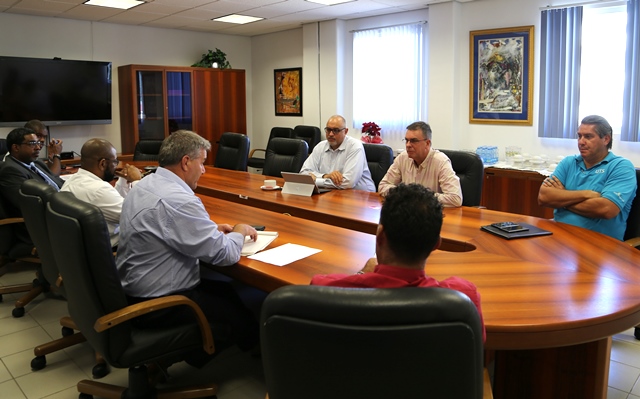 POND ISLAND – TelEm Group is following up on the advice of VROMI to inform public utilities company GEBE and other telecommunication carriers on the island about the company’s plans for a massive rollout of its Fiber-to-the-Home Project starting in March.

According to VROMI, TelEm Group’s plans to connect a high number of homes per month with state-of-the-art fiber optic cable could be very disruptive because of the amount of civic works that will be required, and it makes sense for the company to work together with the public utilities company GEBE, UTS and St. Maarten Cable TV so that all companies can carry out such works together with the least impact to the neighbourhoods they are working in at any particular time.

On Wednesday, February 1, TelEm Group met with a team from UTS led by Managing Director Glen Carty, to brief them about the company’s plans and seek cooperation with UTS as advised by VROMI.

He said the meeting was cordial and thanked Carty and his team for accepting an invitation to meet and also for making some sound suggestions during the meeting.

“We have decided to form a focus group that will consist of all interested parties to look at all the aspects of working together so that there is clear understanding of what can be expected of everyone,” said Louisa.

He said, “the scale of the project alone means there should be clear guidelines that will allow us to execute our project in an efficient manner and without delay, and with the help of the focus group and support from VROMI, the guidelines will be in place very soon.”

TelEm Group’s new Chief Executive Officer (CEO) Kendall Dupersoy, who sat in on Wednesday’s meeting, said he was pleased to see the two telecommunications companies working together in a manner that could save money so that those savings can be passed on to consumers

“The initiative is good one and I fully support it. I was encouraged by the cooperation with UTS and Mr. Carty and I also look forward to the recommendations of the focus group that has now been established,” said Dupersoy.