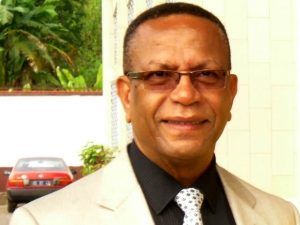 Recently, our Prime Minister, the honorable William Marlin, leader of the United Democratic Alliance, which consists of the NA, USP and DP coalition, declared war on the Kingdom Government when he stated that said Government can “send in the troops to implement the Integrity Chamber.”

This reaction reminds me of my childhood days. When a friend did not want to conform to the rules, he would walk away defiantly from the game, declaring that he wasn’t playing anymore. Certainly, there are other ways to resolve a conflict. In Sint Maarten, where we are seeing a rise in aggression and violence because people no longer are willing to dialogue and resolve their conflicts by means of negotiating, it is important that our leaders set the right example for the people to follow. We believe that, in this national dispute between Sint Maarten and the Kingdom, it would be a good opportunity for both parties to model positive conflict management strategies, instead of resorting to threats and forceful language.

The protocol entailed that the Kingdom Government would help with the establishment of the Integrity Chamber by hiring a quartermaster and granting financial assistance up until 2018. The agreement also clearly states that, in case of a conflict or dispute regarding the agreement or its implementation, parties would bring the case before the Council of State of the Kingdom.

Hence, the way to deal with misunderstandings and disputes has been laid down, in the aforementioned protocol. Therefore, there is absolutely no need, to pass motions in parliament, to resort to forceful language, to rile up the people or to have the troops come in. I agree with our Prime Minister, that the Kingdom Government did not adhere to the date that the quartermaster had to be appointed and that the Minister of Kingdom Relations should have informed the Government of Sint Maarten in a timely manner that he still intended to appoint a quartermaster.

In my opinion, blaming each other at this point is a matter of the pot calling the kettle black.

According to article 43 sub 1 of the Kingdom Charter (Statuut), it is the responsibility of the countries in the Kingdom (The Netherlands, Aruba, Curaçao, Sint Maarten) to realize good governance. Sub 2 of the same article specifies that, the safeguarding of good governance in these countries “shall be a Kingdom affair.”

In other words, the Kingdom Government acts as guarantor of good governance and consequently has been given full authority by the four countries, to safeguard and protect the principles of good governance within their respective countries. This article was in the original 1954 Kingdom Charter that governed the Netherlands Antilles.

I do not recall the negotiators of our newly achieved country status questioning this article and warning that it would perpetuate the colonial relationship between Sint Maarten and the Kingdom. Our political leaders at that time, many of whom are still currently in parliament or in government, accepted this article blindly and signed off on the Charter but are now crying wolf.

If we do not want the Kingdom Government to function as guarantor of good governance any longer in Sint Maarten then we will need to seek to have the Kingdom Charter amended. Grandstanding in parliament, passing motions against the establishment of an Integrity Chamber, boycotting the March 2015 agreement or issuing threats and using forceful language is definitely not the right course of action to follow.

It is a public secret that integrity breaches were prevalent during the days of the Island Council. However, after 10-10-10, it appears as if integrity issues became even more widespread in government and in parliament. Bribery, greed, corruption, nepotism, under-the-table deals, vote buying, lies, lack of transparency and accountability as well as ship jumping became the order of the day.

Last week, in his statement to the press, our Prime Minister categorically stated that he will not cooperate with any general measure of instruction issued by the Kingdom. Does this mean that, if the Council of State supports the decision of the Kingdom Council of Ministers to instruct the Governor to ensure that the Integrity Chamber is established as quickly as possible, the Honorable William Marlin will step down from his post as Prime Minister? If he were to eat his own words and stay on as Prime Minister, would he cooperate and comply with the General Measure of the Kingdom Government?