PHILIPSBURG, St. Maarten – The authorities are still investigating the brutal murder of a gas attendant at the Tackling Gas Station in Cole Bay early Monday night.

Two robbers robbed the gas attendant and during this process, fatally shot him after which they fled and attacked the Shell Gas Station in Simpson Bay where they conducted their second robbery for the night. 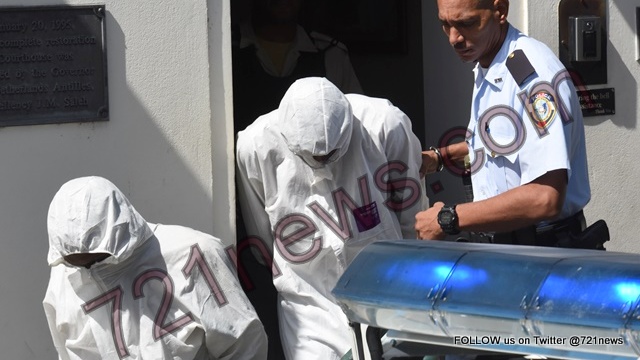 Robinson and Dixen leaving the courthouse, both robbers detention was extended by the Judge of instruction with 8 days more. Photo by 721news.com

They were caught by the police shorty after on the Causeway as they tried to make their escape. The robbers drove a black Hyundai I 20 to facilitate their deadly crimes.

The two suspects with Brendon Dixen (22) from Sint Maarten and Ronald Robinson (23) from Nevis dressed in forensic garb, were brought before the judge on Thursday with their identity closely being protected by the authorities.

In his decision the judge of instruction authorized eight days detention  requested by the Prosecutor in order to facilitate the investigation. 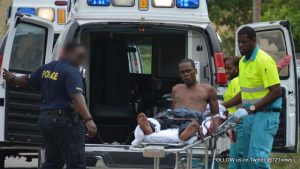 Brendon Dixen is been roll into the ambulance in october 2014 . File Photo sxmislandtime.com

721news has now learnt that at least one of the robbers have an extensive police history on the island of Nevis, in 2012 he was arrested and charged with Burglary and Robbery committed on Thursday 2nd August 2012 at Ramsbury. Source SKNVibes News Website.

In October 2014 Brendon Dixen was arrested for having a load gun and he and another suspect pointed a gun at police when they was chasing them. Dixen was shot in his leg by a police officer. Source sxmislandtime.com
Ronald Robinson of Craddock Road is a suspect however it is not clear if he was the trigger man in Monday’s fatal robbery.
RELATED STORY: >>>>…….CLICK HERE. *** {VIDEO} UPDATE ***: Shooting Suspects caught; Gas attendant shot dead at Tackling Gas station Colebay