Home 721news Theo: Be safe and adhere to rule of law 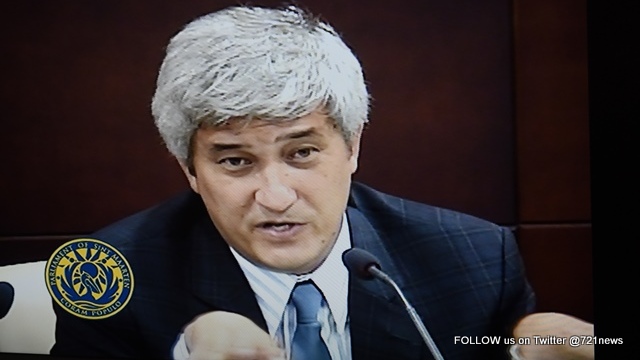 PHILIPSBURG – Leader of the United People’s (UP) Party and Member of Parliament (MP) Theodore Heyliger said, “Today marks a new starting point for Country St. Maarten, and a chance to alleviate the burden of instability and economic disaster we face.”

He also encouraged voters of the community and supporters of the UP Party to go out and vote early. However, he called on everyone to be safe, and adhere to the rule of law. “Let us all be respectful of the rule of law, and of those who are charged with enforcing these rules. It is the democratic right of each individual who has a voter’s card, to go out, get time away from work as prescribed by our laws, and cast your vote for the candidate of your choice. This should be done and has for years been conducted in an environment of peace and fun, and this time should be no different,” he stated.

Heyliger stated in a press release issued Sunday, September 25, that everyone must recognize the importance of their vote and exercise this fundamental right on Monday, September 26.

“This is a time when our country is at a very dark place in its young history. Today marks the third time in six years we have gone to the polls after seeing six changes in government during that same period. Naturally, this constant shift in Government has left us with a weak economy, vanishing investor confidence in our destination, and a crumbling tourism product,” he said.

“Your decision to vote, is understandably not an easy one, but a necessary one in order to bring judgement on those who have deceived the country and restore stability to our great land. Since before my time in politics, my family and yours have enjoyed a reputation of being innovators of development in this beloved country of ours. But now, St. Maarten, once one of the premier travel destination in the world, has already begun to see cruise lines discontinue their scheduled visits to our port. We cannot afford to allow this decline to continue. Today the United People’s Party has brought you hope for a brighter tomorrow through a team of distinguished ladies and gentlemen, who are ready to restore our country to the glory it once had and finally make our lives, and our children’s future, better.”

“When my grandfather, the late Dr. Claude Wathey, a patriarch of tourism development, passed the mantle to me, I have pledged my life to ensuring that our country is always as the beacon of the Caribbean. It is for this reason me and my team of 23 candidates have worked tirelessly on the campaign trail to bring you the hope of recovery and economic stability, with a proper healthcare system and medical facility for St. Maarten,” he continued.

“Too many people have mentioned to me how disheartened and let down they feel to see that we are nearing the low level of economic activity we saw after 911, with the risk of more loss in both airlines and cruise ships. Already JetBlue is a major loss for our country and over 600,000 cruise passengers will be lost to Tortola. I urge you my fellow citizens to be very mindful of what is truly at stake, because today you would be electing, not ministers, but 15 Members of Parliament who make up the legislative body of government and who will select their choice of Ministers to work for you,” he stated.

“My political life has been one of commitment to you, the people during which I have kept every promise I have made. My record shows that with your support and trust, I have been able to deliver a booming economy, a thriving tourism industry and a better way of life for all. My recommendation to you is to be very careful with those who, in order to get your support, will use deceitful tactics, claim responsibility for work they did not do, and offer you grandiose promises of projects and plans in order to convince you to put them back in office. We cannot afford to make this mistake again, especially knowing these individuals have in the past already sold you out for their own personal gain, not once, but on five different occasions causing government to collapse.”

“I urge you to send a clear message that you are tired of their games. Let it be resoundingly clear that you will no longer be misled and that you will not continue to risk the financial stability of your family while they fight to take what they can from the country for themselves,” he concluded.

Source: 721 News Theo: Be safe and adhere to rule of law