PHILIPSBURG, St. Maarten – An officer attached to the islands Immigration Services was shot on Wednesday night in the vicinity of the St. Peters Gas Station.

Young Officer Jason Juliet is said to have received at least two shots by an unknown person and was rushed to the St. Maarten Medical Center by Ambulance.

The young Officer sustained wounds to his leg. At this moment it is not clear if he sustained further injuries.

The area has been cordoned off and the crime is now being investigated by the police.

Media investigation at the crime scene Wednesday night indicates that Juliet visited the restaurant Wednesday night in St. Peters to purchase some food when the suspect is said to have started an argument with the off duty Officer.

An attempt was made to strike the Jason and he defended himself by overpowering the suspect. Jason thought the incident was over only to be caught by surprise when he was again confronted by the suspect who fired shots at him with a pistol wounding the young Officer.

One of the bullets is said to have ricocheted off the wall in the restaurant and hit a car that was parked on the opposite side of the road. Luckily no one else was hurt as a result of the ricocheting bullet.

The suspect after his act then fled the scene of the crime possibly to Cay-bay where members of his family reside. The police in their hunt for the suspect, cordoned off the area and was observed in an intense search on Wednesday night.

At this point it is not clear if the suspect “Poya” Bremer who is known to the police was found and arrested. Police Spokesman Chief Inspector Ricardo Henson issued a report which can be read below. The same suspect is suspected of beating and threatening to killed Judith Roumou a few months back, the detective did not push hard enough to get this suspect off the road.
Last week it was reported in the Dutch and Curacao media that Judith Roumou had to leave Sint Maarten for not to be killed !!!!

The Emergency Dispatch, on Wednesday December 16th at approximately 07.00 p.m., sent several police patrols and Detectives to the L.B. Scot Road in the vicinity of Benny Scots’ property, where report came in that the Immigration Officer Jason Juliet, son of the retired police officer Geronimo Juliet had been shot.

On the scene the officers learnt that the suspect in the shooting is well known to the police with the initials J.B. living in the Sint Peters area. The victim, who was shot in one of his legs, was found on the scene and treated on the scene by paramedics and then taken, by ambulance, to the Sint Maarten Medical Center for further treatment.

After committing this act the suspect fled the scene. At this moment it is still unclear what the reason for the shooting was.

The area has been closed off for the Forensic Department to collect evidence and the Detectives to talk to witnesses and conduct an in-depth investigation. More details at this moment are unavailable as the investigation is in its preliminary stages. As more details become available the media will be informed. 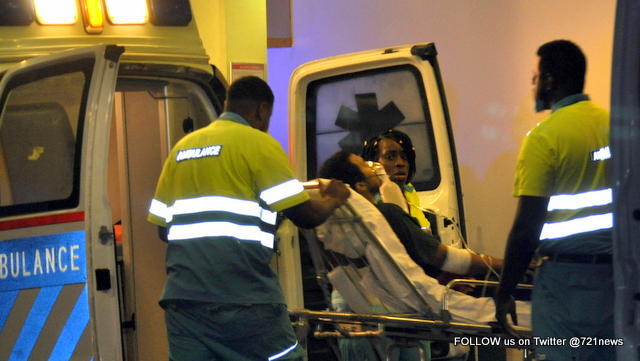 Source: 721 news *** UPDATE *** Police has Caybay lock down, they are looking for Poya Bremer who shot a immigration officer multiple times