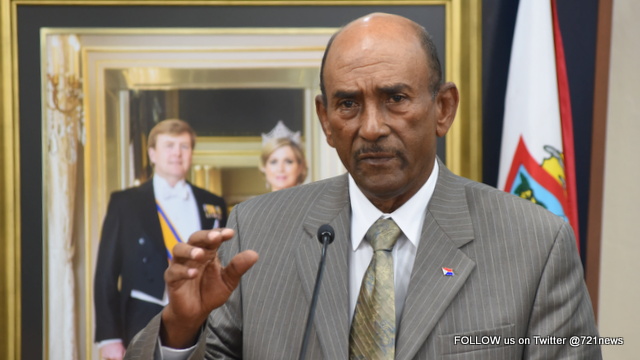 PHILIPSBURG – A delegation of Dutch Caribbean islands, put together by the Central Bank, has made strides in a meeting with officials in Washington, D.C., to address the problem of de-risking of Caribbean banks.

Minister of Finance Richard Gibson Sr. told the media on Wednesday, June 15, that a proposed arrangement for Dutch Caribbean and US banks, similar to an arrangement in Mexico, was met favorably by officials in Washington, including from the Department of Justice, representatives from the White House, Treasury Department and other departments.

“The United States was able to make some exceptions for Mexico and find a solution to be able to avoid a situation like that occurring in Mexico. We are substantially compliant as a country with all of the EML, CFT requirements. Based on that, we asked these departments we visited that we would like to also make arrangements similar to that of Mexico for the Dutch Caribbean islands. And I am pleased to announce we did not get a negative reaction and steps, as we speak, are being taken to see if a similar arrangement could apply to the Dutch Caribbean islands,” Minister Gibson stated.

He explained that with de-risking, banks in the Caribbean and more specifically, the Dutch Caribbean run the risk of not having arrangements with US banks, and as such are unable to do business internationally. This, the Minister noted, means that countries that rely on imports would be unable to pay for its imports. In Belize, he noted that the banks have to do their transaction through the Central Bank, which is very unusual.