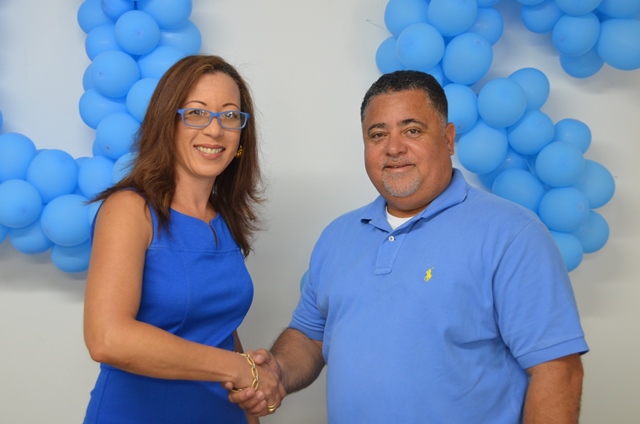 PHILIPSBURG, Sint Maarten — The United St. Maarten Party (USP) on Friday announced that former Commissioner and Minister Maria Buncamper-Molanus will be contesting the September 26 Parliamentary Election as a candidate on the USP slate. Party leader and Member of Parliament Frans Richardson said he is extremely pleased that Buncamper-Molanus has agreed to join the USP family as he knows she still has “so much to offer to St. Maarten.”

MP Richardson has stated on numerous occasions that the USP has no issue in giving persons who have served St. Maarten the opportunity to do so again despite personal setbacks. “Maria is a former Senator of the Netherlands Antilles, a former Commissioner, and a former Minister. That kind of knowledge should not be underestimated or undervalued. Her body of work speaks for itself.

“I will not stand as judge, jury and executioner over anyone who is dealing with issues in their personal lives. We know her capabilities and value her presence as part of the team. There were over 200 people who believed in Maria last election. Her ideas were fresh and forward looking and she will bring this to the party as well,” Richardson said.

Buncamper-Molanus said truly she wasn’t planning a run in 2016. However, the fact that the board, advisors and leadership of the USP are on one line to put people first, appealed to her. “It is fair to say that once you’ve been bitten by the political bug, politics is in your blood. It is therefore not strange that I continue to follow the political developments on St. Maarten even after the last election and missing the seat in Parliament by one vote. This considering having been out of office for four years,” she said.

“In an effort to avoid a cliché I will suffice by saying that I am getting back in the race because I still have allot of energy and believe that the knowledge and experience I have can still be put to good use in Government, in particular in the Parliament of St. Maarten.”

“There are so many ways a person can contribute to the community as I have done for example for years through volunteering with non-profit organizations and so running again on a political list was not necessarily what I was looking for, but the USP for some time now has expressed appreciation and recognition for my contributions in public office. My opinion is valued, perhaps because it is a young party, perhaps because they have insight and foresight, however whatever it is it appealed to me.  We have discussed the issues and have found common ground and I feel comfortable and excited going into the September 26th election with USP focusing on the issues that matter to the people of St. Maarten,” she said.

She continued: “There are those who are very good at articulating, being loud and putting on an attractive performance, but at the end of the day this is not necessarily based on genuine concern nor does it lead to any genuine results for our community. Much is said about leadership and certainly while every political leader has positive attributes which contribute to obtaining the necessary support to get elected, many fall short on carrying that genuine concern with them into the Parliament once elected, but this is not so for Frans Richardson and this is what speaks to me when it comes to the leader of the USP.”

As for St. Maarten and her contributions moving forward, Buncamper-Molanus said accomplishments can be listed every term, but the true measure of any effort is determined by how well the people are doing.  “How high the quality of life is for people in the tough situations. We can evaluate ourselves as representatives by how well the people are able to take care of their needs. At the core of all of this, is the economy and jobs. At the center of this evaluation is whether or not the people on the lowest level of the economic ladder are able to live from the wage they earn from a 40-hour work week,” she said, tying into something Richardson said his party will be championing; a living wage.

“We can only judge our educational system if those who have gone through it in fact are able to use their knowledge to improve their lives. We must address a few basic issues such as better participation in the economy by our people (better and better paying jobs), better educated labour force as a result of the available education, which then leads to better paying legitimate jobs for our people, then we will have something real to measure. Overhauling our Tax System so that the people have more buying power. I call this process “together legit”. No one can do this on his or her own. We need the people to empower themselves, vote the right representatives/candidates into office, who will put the people first and ensure that the people get the best St. Maarten has to offer.”

Buncamper Molanus expressed her gratitude to MP Richardson and to the USP party for giving me the opportunity to join the party on its journey. “Thank you for valuing my experience and my ability to effect positive change. I look forward to working with this group of driven patriots and in particular sharing my experience with the new candidates. It can be safely said that public service is for me a lifelong service and God knows this job never ends.”