Home 721news Who’s Out to Get Regina LaBega?

Philipsburg, St. Maarten – At least two members of the Supervisory Board of Directors of the Princess Juliana International Airport Operating Company (PJIAE NV), who are also on the Board of the Holding Company (PJIAH) are allegedly on a mission to get rid of the managing director of the airport, Ms. Regina Labega.

721news sources is saying the two members who are reportedly Michel Hodge, and Ludwig Ouenniche may be acting on behalf of some politicians and even the caretaker Prime Minister Marcel Gumbs who has refused to sign the building permit for the FBO building. Hodge and Ouenniche have even written in emails that Labega should be fired.

One of the reasons they want Labega fired is because she did not cooperate in giving the government a “donation” of over a million dollars from the airport when they was trying to find money to balance the budget sometime at the beginning of this year. They try to put pressure on her to give the money when Ouenniche was in the cabinet of the minister of finance. 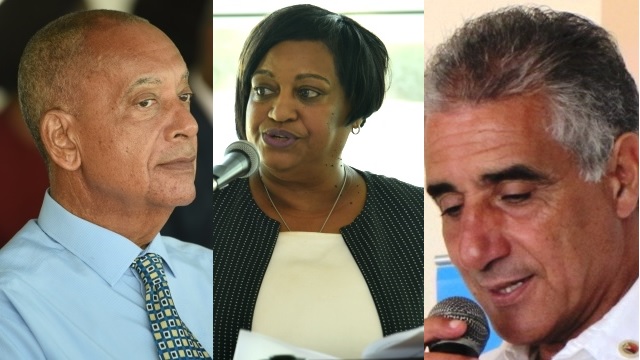 Another reason the school children say Labega has to go is because Taliesen Construction won the contract to build the new FBO building. According to this version, the powers that be say over their dead body Taliesen will build the FBO building. They want Labega to re-open the bid so that another company will get the contract.

In fact, our sources say caretaker PM Marcel Gumbs wanted Labega to apologize to him in writing allegedly because he is angry that she told Parliament that the FBO building was held up in his office and it make him look bad in the media. However, he did not put his demand for apology in writing to her when she ask for it.

As Prime Minister, Gumbs is in charge of the VDSM that do the screening of Ms. Labega and although sources say she pass the screening, the PM still will not give her a certificate of no objection because he say she is a security risk in the position of managing director of the airport. This sound strange to a lot of people because the same Labega signed a huge loan of US$130million with the blessing of government which save the airport US$10million in interests and which is being used to finance all the projects at the airport now.

A source who is knowledgeable about these developments say “there is always more in the mortar than the pestle. They’ve been bragging on this in the cigar bar.”

Labega’s lawyer, Cor Merx has filed an injunction in the court to force the board of the airport not to execute the instruction of the Prime Minister to fire Labega within 8 weeks until her appeal has been heard.

Source: 721 news Who’s Out to Get Regina LaBega?