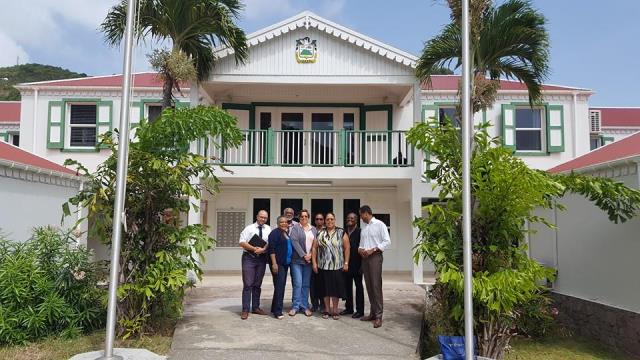 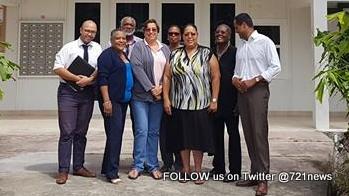 The visit to the island was to bring them up to speed on the developments regarding their members in Saba.

On Wednesday afternoon, June 8, they met with Island Secretary Tim Muller and his support team at the Government Administration Building. They were accompanied by two of their shop stewards on Saba.

Solognier stated that the discussion with Muller and his support team went well and they were able to discuss several important matters related to their membership on Saba. One of the points that were clarified was that earlier this year WICSU/PSU had signed an agreement with the RCN on Bonaire and that the agreement was not signed on behalf of the membership working for the Public Entity Saba.

“I wanted to make that very clear so as to avoid any misunderstanding going toward our members on Saba,” Solognier stated. “The decision of the Executive Council to adopt the agreement of the RCN as of June 1, does not have the support of WICSU/PSU because we did not sign on behalf of the employees working for the Public Entity Saba. The Executive Council can adopt it, but that does not close out any discussions or negotiations for our membership on Saba,” she continued.

“We discussed matters related to the salary scale structure and Mr. Muller promised to have a serious look into this and get back to the union by the end of June, after looking at the financial consequences of the matter. As a union representing the employees we have a right to seek better wages for our membership and that is why we came over to Saba to hold talks.

“The meeting was very amicable and everyone seems to be on the same page when it comes to the well-being of the civil servants working for the Public Entity. Everyone agreed that something has to be done for the civil servants, but the reality of the financial situation of the Government is not in any position at this time to have any major salary increases, but there is hope that something can be worked out that will benefit the civil servants overall. If it means that as the union representing the civil servants we have to also try and convince the Dutch Government that Saba deserves much more funding going to the Free Allowance. We are prepared to render our assistance and work along with the Government of Saba in the general interest of all,” Solagnier continued.

“The high cost of living on the island has to be dealt with in order for everyone to be able to feel at ease. We also touched on the training possibilities for our members and as Mr. Muller stated plans are being worked out and already some departments have started to undergo training. He mentioned the Security Department at the airport that recently traveled to St. Maarten and had training at the Princess Juliana International Airport and he is looking forward in much more training possibilities for the civil service,” she explained.

“As union it is our task to make sure that our members are being treated rightfully and we have committed ourselves to do whatever is within our authority to work along with the government to bring about solutions that will benefit our membership on Saba.

“We agreed that the Government will present a draft Collective Labour Agreement by the end of August in order for us to go over and negotiate a good CLA for the workers. This CLA will also have the input of all of our members because we believe in being transparent with our members as we move forward,” she stated.