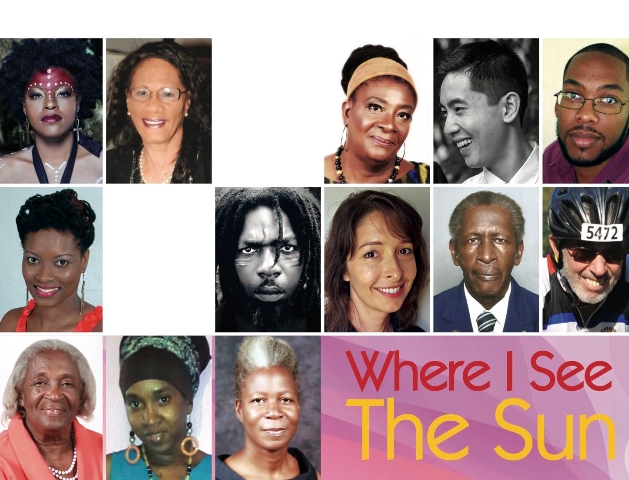 PHILIPSBURG – Where I See the Sun – Contemporary Poetry in the Virgin Islands, A New Anthology edited by Lasana M. Sekou, will launch in Tortola, Virgin Islands (VI) on Friday, November 18, said president of House of Nehesi Publishers (HNP) Jacqueline Sample.

The book of 26 poets and spoken word artists from Tortola, Virgin Gorda, Anegada, and Jost Van Dyke was just published in St. Maarten by HNP. The VI territory’s Ministry of Education and Culture and the Department of Culture are the hosts of the book launch, said Information Officer II at the ministry April T. Glasgow.

“We’re inviting the Virgin Islands people and visitors to the grounds of the Central Administration Complex in Road Town, Tortola for the launch program of literary readings, presentations, book signing, and refreshments. It’s a celebration of the book and the writers,” said Dr. Patricia Turnbull of the book project’s promotions.

USA poet Craig Czury couldn’t resist a line from one of the book’s poems to describe the collection as “the catch that breaks the nets and draws a village to itself.”

According to Marie-Galante poet/novelist Max Rippon, the VI edition of Where I See the Sun is “at the crossroads of these always questioning seas, sometimes Caribbean, sometimes Atlantic.”

The book opens with VI poet par excellence Alphaeus Osario Norman (1885-1942), and selections of his verse that have been – until now – rarely available to wider Caribbean audiences and lovers of Caribbean literature everywhere, said Sekou.

“Some of the writers are new and promising and their poems reflect that. Some of the poets have been busy for some time in the Virgin Islands,” said Sekou.

“There are also those senior or highly skilled wordsmiths that are competitive as world-class poets, and as critic Fabian Badejo reminds us, the size of small Caribbean territories should not hinder their writers from sharing their critically evaluated writings within their nation, in the region and beyond in quality publications,” continued Sekou.

In his introduction to the book Richard Georges, a VI literary historian, connects the value of investing in the arts and book publishing. “HNP is thankful for the outstanding contribution from the Virgin Islands Ministry of Education and Culture and the informed readiness of Minister of Culture Myron Walwyn, toward the production of Where I See the Sun,” said Sample.

“The SXM Airport, in its accustomed corporate citizenship style, also contributed to what HNP would like to call a literary hub project. JOMA Properties, BVI Tourist Board, and the National Bank of the Virgin Islands proved to be unique cultural arts contributors in making the new literary title a concrete reality,” continued Sample.

Where I See the Sun – Contemporary Poetry in the Virgin Islands will be available at the book launch, in VI bookstores and from the writers, at Van Dorp in St. Maarten and online at SPDbooks.org and other bookstores.