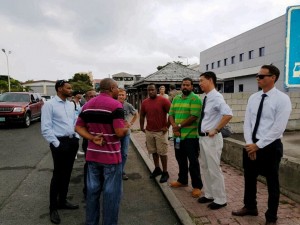 PHILIPSBURG, April 18, 2016 – Despite the slight drizzle, several concerned residents gathered on Monday morning at Clem Labega square in front of the Government Administration Building which resulted in the signing of an official letter requesting the Council of Ministers to urgently deal with the Sanitary Landfill (aka The Dump) problem.

In the meantime, the letter has been submitted to Government through its General Affairs department and copies have been delivered to the Governor’s Office and the office of the Ombudsman.

An on-line petition has been created to give the general public the opportunity to sign on as concerned residents also looking for a solution to the “Sanitary Landfill problem”. The petition can be signed here: http://www.ipetitions.com/petition/the-dump-problem

The full text of the submitted letter to the COM can be read below:

We, concerned residents of St. Maarten (hereinafter referred to as “Residents”), would like to ask your attention for the below.

Taking into consideration that:

We thank you for your time and attention to this urgent problem facing many residents of St. Maarten.

A copy of the signed letter stamped by General Affairs and the Governor’s Office below: 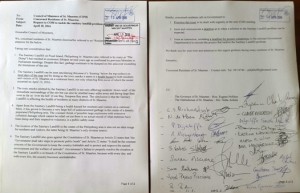