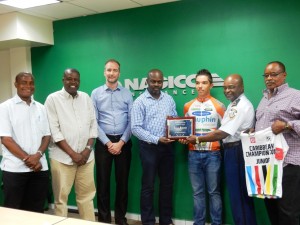 GREAT BAY—- The management team of NAGICO Insurances in collaboration with the Velo Club de Grand Case presented the ‘Gamali Benjamin Award’ to Alban Clerc, one of the youngest riders who participated in the recently held NAGICO to NAGICO (N2N) Cycling Race.

The award; which was named after the late Officer Gamali, represents courage and is given to the cyclist who despite not winning the race was considered the most dynamic rider.

“We at NAGICO are no doubt elated to be part of this moment,” CEO of NAGICO; Dwayne Elgin said to the small group gathered at the company’s Head Office for the presentation. “This is a sentimental award for us because it represents one of our police officers whom we were very proud of, one who died protecting our community and one who was always part of our N2N cycling race from the very first year we started. I want to congratulate Alban on winning this prestigious award and hope to see his name on the Tour de France someday.”

Velo Club President; St. Elmo “Mote”, described Alban as a promising cyclist. “This young guy from the very first time he started riding, showed that he has talent and that he is a serious rider. At just 16-years old, he not only participated in the N2N Races, but also represented the island in the Caribbean Championship where he rode 16kilometers at 41 mph and won the title of Junior Champion in that race. He performed extremely well in the race and really deserved this award.”

Police Spokesman; Chief Inspector Ricardo Henson did the honor of presenting the award. “This award is very prestigious and means a lot,” he said. “Officer Gamali was an icon in the organization (police force) and community. He was responsible and was a good example to all of us. This award should mean something to you because you are carrying an entire country on your shoulders and I want to congratulate you at this time on your accomplishment.”