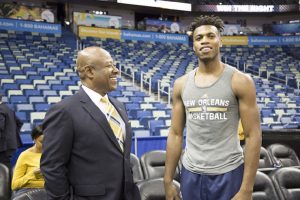 BAHAMAS BRANDING WILL BE SEEN BY MORE THAN 7 MILLION PATRONS AT THE SMOOTHIE KING CENTER IN NEW ORLEANS, LOUISIANA.

LOUISIANA, United States – “It’s Better In The Bahamas” is the message that thousands of music lovers, NBA and other sports fans throughout the Gulf South Region of the United States will see each time they attend an event at the Smoothie King Center in New Orleans, Louisiana.

The Bahamas Ministry of Tourism (BMOT) has entered into a sports tourism partnership with the New Orleans Pelicans in hopes of positioning The Bahamas as the premiere vacation destination throughout the Gulf South, which includes the states of Louisiana, Georgia, Florida, Alabama, Mississippi, Arkansas and Texas.

“We’re not that far away from The Bahamas and we are all about hospitality just like your destination so I think it’s the perfect fit. You’re not just reaching the residents of New Orleans, you know there are 7 million people that call themselves Pelicans fans and they’re spread out across the Gulf South. So, whether they’re in Louisiana, Mississippi, Alabama or any of the other states in this region, we’re sending the message that The Bahamas is where they want to be for vacation,” said President of the New Orleans Pelicans Dennis Lauscha.

The idea was conceived after Bahamian basketball sensation Chavano “Buddy” Hield was drafted to the New Orleans Pelicans, and the partnership was fully embraced by the organization’s executives.

“We’ve brought The Islands of The Bahamas’ multi-destination brand and cultural display to New Orleans through the ownership of the most visible and prominent branding assets in the Smoothie King Center, the Loge Boxes. This is also the prime position to reach fans watching local, regional and national television broadcasts. We want to invite fans to discover our islands,” said Bahamas Minister of Tourism Obediah Wilchcombe.

The Bahamas Ministry of Tourism has exclusive rights to the Loge Box area in the Lower Bowl of the Smoothie King Center. This means that captivating Bahamas branding will be visible to fans attending Pelican’s home games and all other events that take place in the 18,000-seat arena including concerts, live shows and other sporting events.

Three Lower Bowl “End Zones” rows are outfitted with images of beautiful beaches, vibrant Junkanoo performances and even the World Famous Swimming Pigs. The slogan “It’s Better In The Bahamas” and contact information are visible from every angle of the arena. The unique marketing initiative was launched last Friday night at the New Orleans Pelicans and Golden State Warrior matchup.

“Starting in May 2017 we have a direct flight from New Orleans to Grand Bahama and we will be taking advantage of the Pelicans database, reaching out to all of their fans through email marketing campaigns to drive the message home that The Bahamas is where they want to be”, said Dupree Smith, Ministry of Tourism district sales manager for Southwest US.

The partnership also allows the Bahamas Ministry of Tourism to have some visibility at the Mercedes-Benz Superdome during New Orleans Saints home games.
Source: Caribbean360 http://www.caribbean360.com/travel/bahamas-taps-new-market-new-orleans-arena-takeover#ixzz4P9WIuzDM