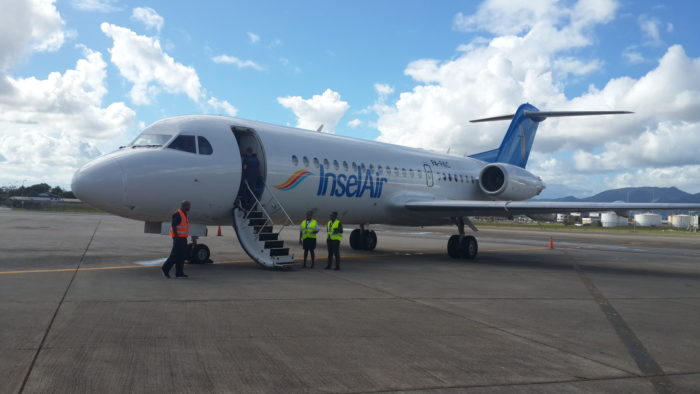 GEORGETOWN, Guyana, Feb 22 2017 – The Guyana Civil Aviation Authority (GCAA) has taken a decision to not allow the Insel Air fleet to fly into Guyana due to safety concerns.

This was confirmed by Director General of the authority, Colonel Egbert Field.

Field indicated that the air service has not been banned, nor has their permit been dismissed or revoked.

Quizzed on what were some of these safety concerns, Field said that Insel had “experienced maintenance problems”. He did not venture to say further.

Insel Air – formally Insel Air International B.V. – is a Dutch Caribbean carrier that serves as the national airline of Curacao. It is headquartered in Maduro Plaza, Willemstad. Insel Air currently serves 22 destinations throughout the Caribbean, South America and North America.

The Director General said that the authority is waiting on the authorities in Curacao to provide a status report on the maintenance of Insel Air aircraft and their equipment.

This report, he explained, will determine how soon the airline will be able to resume its operations here.

This revelation comes against the backdrop of reports emanating from the Curacao media about Insel Air facing some financial difficulties as well as safety issues with its fleet.

Curacao authorities have grounded most of the airline’s planes over safety concerns. Reports out of Suriname state that Curacao’s Civil Aviation Authority has grounded almost all of Insel’s planes.

The Curacao Chronicle reported weeks ago that there exists a plane graveyard where planes are “dumped” because of the company’s alleged lack of sufficient funds to effect repairs. (Kaieteur News)