By MP Melissa Gumbs published on LinkedIn on June 30, 2022

Author’s Note: Recess Reflections is going to be a weekly series (postings on Thursdays) throughout the 2022 Parliamentary recess, which is six weeks long. It will cover a variety of topics regarding the political, financial, socio-economic and geopolitical situations on St. Maarten. It is also a challenge to myself, to write my thoughts in long-form more often. With this first in the series, I hope you’ll join me on this journey. Welcome.

On June 29th, 2022, the Party for Progress faction in the Parliament of Sint Maarten, of which I am faction and party leader, announced that it would be bringing a motion of no confidence against the Minister of VROMI, Egbert J. Doran. This, following an earlier (October 2021) motion of disapproval (or ‘motie van afkeuring’ in Dutch) against the same Minister for his mishandling of the Over the Bank long-lease land and his Vineyard Heights pet project.

The motion of no confidence stems from the final report of the Ombudsman of St. Maarten’s Systemic Investigation Regarding the Tendering and Awarding Process of the Solid Waste Collection 2021-2026. As some may know, MP Christopher Emmanuel dragged the spotlight over this process in early 2021, after several bidders had expressed their concerns and frustration with how tendering was being handled. In the report, the Ombudsman raised the alarm over the handling of the tender process and the Minister’s deep involvement throughout.

After reading the report, it became obvious to the PFP faction that the usual political shenanigans had taken place and allowed for an environment where bid rigging was all but guaranteed. Particularly where it regards Price being such a heavily graded component of the tendering process, despite the Terms of Reference stating the price would not be a determining factor. The forty-point weight given to Price, contrasted with the ten-point weight given to a Preliminary Work Plan, was just one very suspicious governance decision that drove our decision to call for a motion of no confidence in the Minister.

The coalition MPs reacted exactly as we’d anticipated: with smirking and giggling accusations of corruption by past Ministers (one of which comes from the National Alliance, albeit an Independent Member of Parliament today) and even went so far as to accuse the PFP faction of wanting to maintain the status quo to our own gain. Because the belief is, we have been gaining as a result of the status quo. It is so very laughable, we could barely keep it in yesterday.

But the most telling thing is the What About-ism? that, especially National Alliance MPs, engage in. It is so secret that things have been running very wrong in this country, particularly where it pertains to tenders from Government. To quote a brilliant article I recently read (https://trinidadexpress.com/opinion/columnists/the-best-government-money-can-buy/article_04cf2362-f4e1-11ec-b488-73eb07c460d2.html), “the tenderpreneurs get their grubby hands on the public purse and send our money to foreign lands.” While our tenderpreneurs are usually homegrown locals, the term itself tells you that these people have built their lives via lucrative government contracts with little or no scrutiny over their ability to actually do the work. The coalition, in their ignorance and their panic, basically tried to say “but these things have been going on, so why the sudden rush to stop the Minister from changing it? It must be because they are corrupt!”

I’ll tell you why we took this step, as I explained in Parliament. Because the Minister is not changing things. He, like many before him, is manipulating an already-corrupt system to benefit different corrupt people, himself included. It’s why he mandated the Minister of Finance, his closest ally in COM, to sign off on alleged ‘conflicts of interest’, and not his actual deputy, the Minister of Education, Culture, Youth & Sports. The Minister of Finance subsequently signed off on long-lease land requests for two close relations of the Minister of VROMI. It’s why Price was given such a heavy scoring weight in the tendering process for waste collection, thus allowing a company with no experience in waste collection and no trucks to handle the work, to garner enough points to win a parcel for collection. For those playing the home game, the company’s director is the close relative of another Minister in the current COM.

So the “What About-ism,” though not surprising, is very misplaced because it is plain that the National Alliance consistently shows that once they are the ones manipulating a system in favor of themselves and their cronies, they have no issue with corruption. In fact, their corruption is made that much more insidious by the fact that they effectively employ sleight of hand when they act.

It’s the “But the Minister has brought a tender policy!” but the policy is, actually, illegal, as no Ministry is permitted by law to have its own tender policy for the spending of public funds.

It’s the “But the Minister is collecting more long-lease canon than ever before!” but not from certain individuals who have contributed to the Minister’s campaign.

It’s the “But the garbage collection by my house is improved!” while other districts continue to suffer in large part as a result of the inept and incompetent haulers that won contracts.

Make no mistake: the only avenue to progress is to actually dismantle the status quo. There will be no exchange of who is doing what wrong; there will be actual change.

August 4, 2022
0
The Bellevue Pharmacy was robbed Thursday afternoon.  (Robert Luckock photo)MARIGOT—The Pharmacy in Bellevue was victim of an armed robbery at around 3:00pm Thursday.  Gendarmes were seen at the pharmacy which was cordoned off with tape. A forensics vehicle was...
Read more 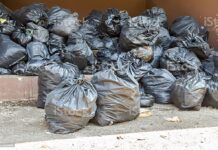 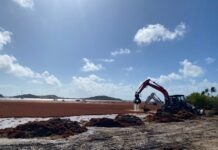 August 4, 2022
0
MARIGOT: After an alarming report published last Monday by the Regional Health Agency (ARS) concerning the levels of hydrogen sulfide emitted by the sargassum...

August 4, 2022
0
MARIGOT: After an alarming report published last Monday by the Regional Health Agency (ARS) concerning the levels of hydrogen sulfide emitted by the sargassum...

August 4, 2022
0
MIDDLE REGION: The second incident occurred close to Sister Marie Laurence Primary School in Middle Region in which a part of a man’s hand...