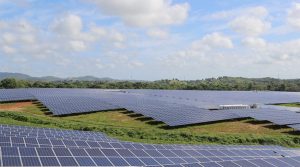 Following the launch of a major new wind farm on the island, the country’s government announced that it was finalizing an agreement with Eight Rivers Energy Company to build and operate a 33.1-megawatt solar facility at Paradise Park in Westmoreland.

The plant represents an investment of $50 million, with construction slated to start in the next calendar year.

“This will be the lowest cost ever for solar power in Jamaica. It will also advance the Government’s major policy objective, namely, the diversification of Jamaica’s energy supply mix to reduce cost and dependence on imported oil,” said Jamaica Energy Minister Dr Andrew Wheatley.

Jamaica is also returning to the market with a new request for proposal for 100 megawatts of renewable energy.

“It is our intention to grow the Jamaican economy in a sustainable, endogenous and inclusive manner. This is the notion of prosperity for all. The Ministry of Science, Energy and Technology is playing a leading role in this regard. One only has to look at our net billing arrangement which has significantly boosted the capacity of individuals to earn from their renewable energy efforts,” he said.