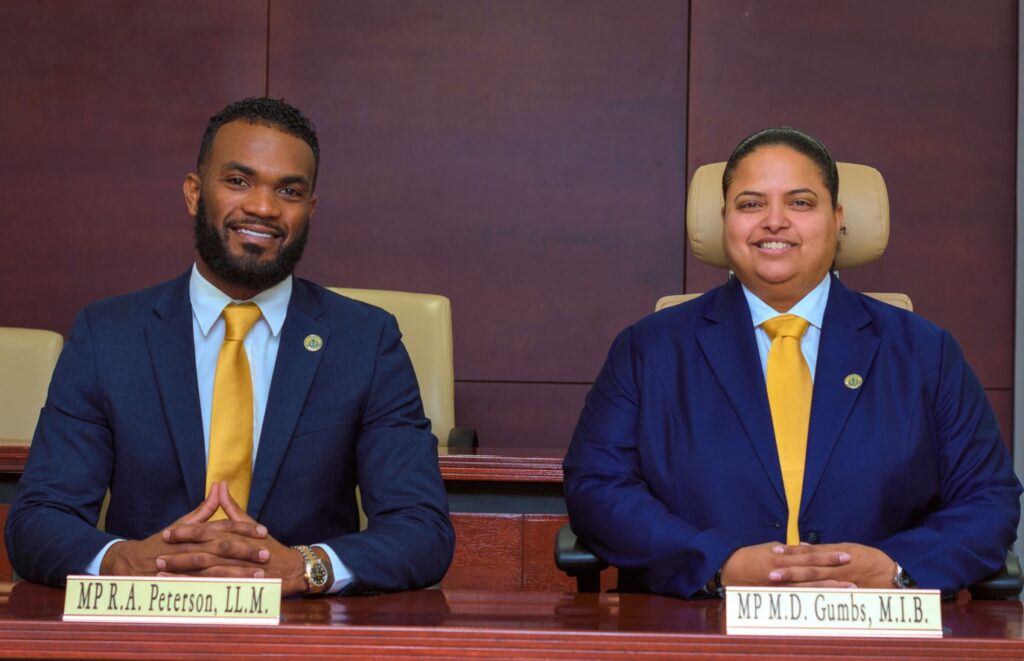 PHILIPSBURG – Party for Progress (PFP) Members of Parliament (MPs) Melissa Gumbs and Raeyhon Peterson and independent MP Solange Duncan have requested a Central Committee meeting of Parliament to continue the process to adopt a Code of Conduct that MPs will be required to adhere.

There is a draft Code of Conduct already on the table. The draft was spearheaded by MP Gumbs, who until November 24 had been chairlady of Parliament’s Ad Hoc Committee for Integrity.

This draft had been deliberated in a Central Committee meeting of Parliament more than a year ago, but had been kicked back to the Ad Hoc Committee because several coalition MPs, chief among them being MP William Marlin of National Alliance (NA), wanted more examples of Parliamentary integrity provisions from countries in the Caribbean region to be embedded into Sint Maarten’s Code of Conduct for Parliamentarians. This request came as a surprise to MP Gumbs, who, as mentioned in the meeting, did incorporate examples from the region.

“At the time, I began to realize the lengths that coalition MPs will go to stall progress within Parliament and the country. I had already given the MPs what they wanted, but it was not seen as sufficient. It wasn’t what was written in the Code of Conduct. What seemed to matter is who wrote it down,” said MP Gumbs. “But I’m not a person to quit because of obstacles, and I’m not afraid to work hard to improve the conduct of our highest elected officials.”

MP Gumbs worked for the next year to fine tune the draft based on the alleged concerns of members of Parliament. She invited Sint Maarten’s Youth Parliament to collaborate on a new draft, and met with the Youth Parliamentarians on Saturdays. Together, they looked at integrity laws in the Federation of St. Kitts and Nevis and the Republic of Trinidad and Tobago, as well as integrity provisions in the Dutch Kingdom.

An important amendment that came out of this collaboration was a new article in the Code of Conduct to empower the Integrity Chamber and the Office of the Ombudsman as impartial bodies to decide on sanctions and fines to MPs who breach the Code of Conduct.

“This is needed because, without it, it is Parliament policing the behavior of its own members. If recent events are any indication, I have no confidence in coalition MPs to sanction its own members for integrity breaches, as they do not hold their members accountable, whether for corruption allegations, abuse of power, or drug scandals,” said MP Gumbs.

Now, with the MPs’ requested meeting, they hope to continue the process to adopt the Code of Conduct to finally have some level of accountability in the country’s highest elected body.

“I took note of MP Brison’s comments on a recent radio program, which serve only to embarrass himself, where he said that the new chairlady of the Ad Hoc Committee for Integrity may achieve more in a few days than I have in two years. And yes, she may, but only to this delusional coalition who regularly take credit for the work of others, whether members of Parliament or former Ministers. If the coalition again fails to approve the trajectory that the Committee for Integrity has agreed on for the draft Code of Conduct, then one thing will be made very clear. That it is not about the content, but who is bringing about the needed change. How will we ever progress as a country if we still stoop to these immature political shenanigans?” concluded MP Gumbs.