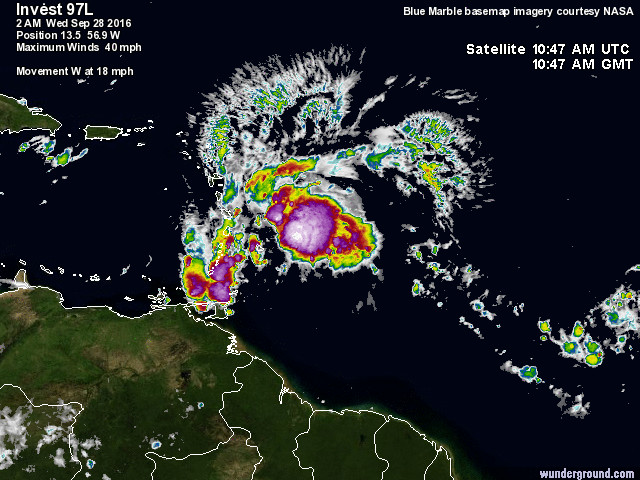 Air Force Hurricane Hunters were unable to find a closed circulation in the midst of Invest 97L, but the system is still on the verge of becoming a tropical storm. Flight-level winds at 2034Z (4:34 pm EDT) were sustained at up to 36 knots (41 mph) on the northwest side of 97L. This translates to ground-level sustained winds of around 32 knots (37 mph), or just below the 39-mph threshold for tropical storm formation. However, a tropical wave cannot be classified by NHC as a tropical depression or tropical storm until it has a closed circulation. The lack of a fully closed circulation was manifested in much weaker winds on the south side of 97L. Southwest winds at flight level were only about 5-6 knots, and no significant westerly winds were found.

It shouldn’t take too much longer for 97L to close off a circulation and intensify enough to become Tropical Storm Matthew. Satellite loops showed that showers and thunderstorms were increasing in coverage and strength in the core of 97L. The system’s upper reaches are well ventilated, with excellent outflow supporting the continued growth of thunderstorms. The usual nighttime maximum in shower and thunderstorm activity could be enough to give 97L a name. In a special outlook issued at 4:20 pm EDT Tuesday, the National Hurricane Center gave 97L a 90% chance of becoming at least a tropical depression by Thursday afternoon.

The outlook for 97L
As we discussed this morning, 97L has a long road ahead of it, with many twists and turns possible over the next week or more. Models continue to support the idea that fast-moving 97L will sweep through the Lesser Antilles on Wednesday, possibly as a strong tropical storm. The strongest winds and heaviest rains of 4 – 8”, with locally higher amounts, can be expected over the islands just north of where the center of 97L is, including the islands of St. Lucia, Martinique, Dominica, and Guadaloupe. The storm will continue westwards on Thursday, and make its closest approach to the ABC islands of the Netherlands Antilles–Aruba, Bonaire, and Curacao–on Thursday night and Friday morning. These islands will be on the weak (left) side of the storm, and may escape receiving tropical storm winds. However, heavy rains of 2 – 4” can be expected, as predicted by the 12Z (2 am EDT) Tuesday run of the HWRF model (see Figure 2).

As it moves into the southeast Caribbean–a challenging place for tropical cyclones, due to persistent sinking air–97L may struggle. Models are in fairly close agreement that 97L’s track will bend slightly toward the west or even southwest in the Caribbean, which could bring the center fairly close to the northern coast of Venezuela, leading to interaction with land that would hinder its growth. Toward the weekend, it appears that an upper-level low over the eastern U.S. will provide an opening for 97L to make a very sharp northward turn. As it enters the central Caribbean, 97L may have a better opportunity to intensify, and residents of the Greater Antilles–including Cuba, Haiti, Jamaica, and the Dominican Republic–will need to keep a close eye on it. While a sharp right-hand turn might seem implausible, there are a number of cases of storms taking such a northward bend, especially in October, with the classic example being 1954’s Hurricane Hazel (see Figure 3 below).

The 12Z runs of the GFS, UKMET, and European models–our best three long-range track models–all support the idea of 97L moving north from the Caribbean into the Bahamas, as soon as Monday of next week (GFS) or as late as Wednesday (UKMET and Euro). Whether or not the U.S. East Coast is threatened by 97L will depend on how soon the expected northward turn occurs and on the evolution of this weekend’s upper-level trough. These factors are too far out to be predicted with any confidence. The same is true for 97L’s eventual peak intensity, although the waters of the Caribbean and northwest Atlantic are at record or near-record warmth, more than capable of supporting a powerful hurricane if the atmospheric preconditions fall into place.

Figure 3. A comparision of the track of 1954’s Hurricane Hazel (left) with the GEFS ensemble model tracks for 97L produced at 18Z Tuesday (left). These ensemble members are produced by running the same model for the same period, each time varying the starting-point conditions in order to simulate the uncertainty in our observations of the atmosphere. The idea is not that 97L will mimic Hazel but that the sharp right-turn depicted by the GEFS does have a precedent. 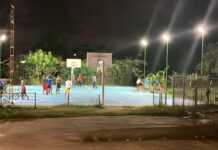