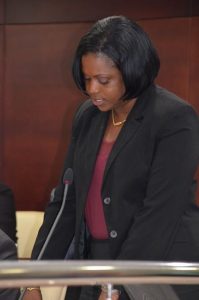 PHILIPSBURG – The UP Party Members in Parliament along with Independent Members of Parliament (MP) Leona Romeo-Marlin and Cornelius de Weever, on Sunday, March 6, held a press conference in which they addressed issues pertaining to the draft budget of 2016, and issues surrounding a meeting held with Prime Minister William Marlin last week.

As far as the budget is concerned, UP leader MP Theo Heyliger confirmed that they had not received a convocation for the Meeting of Parliament to handle the draft 2016 budget. The UP leader also confirmed that they will be attending the faction leaders meeting, which will take place today, Monday, March 7, and that they will also sign in for the budget debate when it is called. As far as the meeting with Marlin is concerned, Heyliger stated that three proposals were laid down aimed at supporting a budget for St. Maarten.

One of those proposals also included a National Government for which the party was requesting that that the portfolios that were taken away by the two former UP members be returned. He noted that there were no other requests for the formation of a National Government. Heyliger also noted that the relationship with the Independent MPs has not been tarnished by this latest political episode.