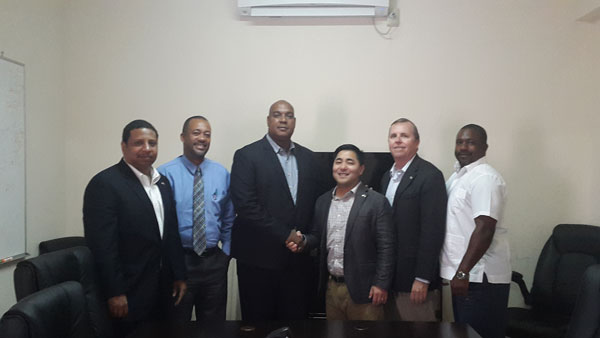 PHILIPSBURG:—  Over the course of three days, February 22nd to February 25th of this year, St. Maarten underwent another Bi-annual Country Assessment. Two facilities were assessed, namely, the A.C. Wathey Cruise & Cargo Facilities and Chevron Bulk Station. The facilities were found to be in satisfactory compliance and no major non-conformities were found. There were some recommendations made, which the local ISPS Committee will be working diligently to implement in order to correct the non-conformities and increase the level of compliance.

The IPSLOs, in U.S. Coast Guard Activities, engage with over 150 partner nations, territories and countries worldwide. The U.S. Coast Guard’s International Port Security (IPS) Program was established in 2003 to reinforce implementation of the ISPS Code as part of the U.S. Maritime Transportation Security Act (MTSA). Through the assessment of ISPS Code implementation and other anti-terrorism security measures in foreign ports and through bilateral discussions to share and align port security practices, the Coast Guard IPS Program seeks to reduce risks to ports and ships, and to the entire maritime transport system.

As an internationally accepted blueprint for maritime security measures, the ISPS Code serves as a sound foundation from which countries can build their own domestic maritime security system. Through its IPS Program, the U.S. Coast Guard is committed to assisting those nations that have not fully implemented the ISPS Code. They are also committed to furthering their engagement and security dialogue with their maritime trading partners that are moving beyond the ISPS Code through advancements in their maritime operational capabilities, maritime situational awareness, and maritime governance.

These efforts require international cooperation between the maritime industry and all flag and port states. By exchanging port security-related information and sharing best practices, we can better protect the international maritime transport system through the application of adequate and proportionate security measures. Ultimately, vessels arriving in the United States from foreign ports with adequate security measures are less likely to be targeted for port state control actions. This reduces potential delays and facilitates safe and secure maritime trade.