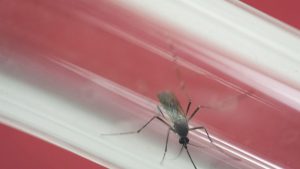 The U.S. government on Friday declared a public health emergency in Puerto Rico as a result of a Zika epidemic.

The declaration allows the U.S. Department of Health and Human Services to award grants, access emergency funds and temporarily appoint personnel where needed, among other things.

“This administration is committed to meeting the Zika outbreak in Puerto Rico with the necessary urgency,” Secretary Sylvia Burwell said in a department statement. Burwell traveled to the U.S. territory in late April to evaluate its response to the outbreak.

A department spokesman did not immediately return a message seeking comment on what immediate steps the agency may take.

The announcement came hours after Puerto Rico reported 1,914 new cases in the past week, for a total of 10,690 since the first one was reported in December.

The mosquito-borne virus has infected 1,035 pregnant women, which is a concern to authorities because Zika has been tied to a severe birth defect known as microcephaly. More than 100 pregnant women infected with Zika in Puerto Rico who have given birth have had healthy babies, officials said.

Puerto Rico reported the first microcephaly case acquired on U.S. soil in May, involving a dead fetus that a woman turned over to health authorities. Since then no microcephaly cases have been reported, but federal officials say it’s only a matter of time.

Gov. Alejandro Garcia Padilla said he had asked federal officials to declare a public health emergency and thanked them for their support.

“Zika poses a hidden threat to future generations of Puerto Ricans, and I feel the responsibility to do everything in my power to fight the spread of it,” he said.

Garcia recently authorized the use of Bti, an organic larvicide, to fight the spread of Zika after rejecting aerial spraying with the insecticide naled as proposed by the U.S. Centers for Disease Control and Prevention.

Puerto Rico Health Secretary Ana Rius said 90 people have been hospitalized because of Zika. Officials also say 30 people have been diagnosed with a temporary paralysis condition known as Guillain-Barre that has been linked to Zika.

Health authorities say they believe the number of Zika cases is much higher because eight of 10 people show no symptoms and many don’t go to the doctor.

The emergency was declared one day after the U.S. surgeon general visited Puerto Rico and said he expected 25 percent of Puerto Rico’s nearly 3.5 million people will be infected with Zika by year’s end.