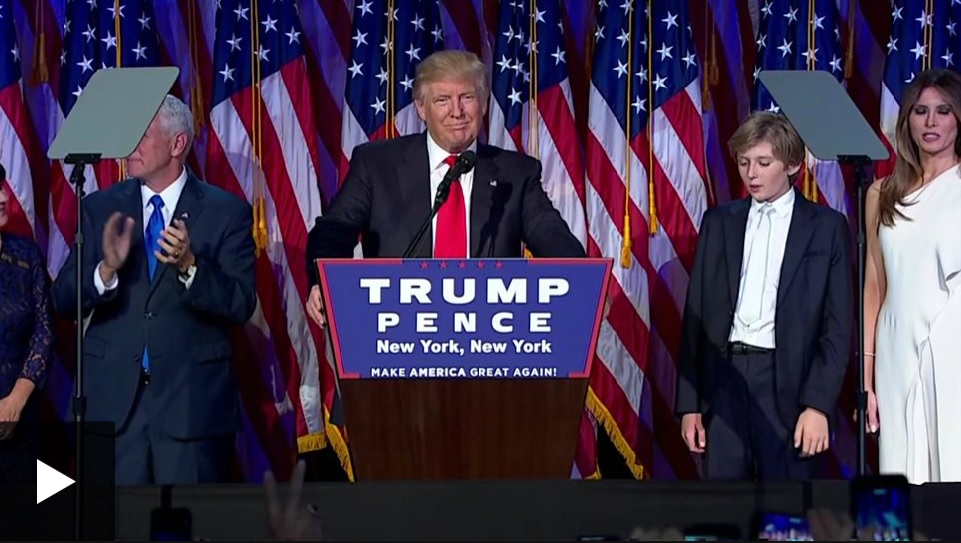 Donald Trump will become the 45th US president after a stunning victory over Democrat Hillary Clinton.

He told cheering supporters that Americans must now unite and “bind the wounds of division”, after a gruelling, acrimonious campaign.

Around the world, leaders and the media have been reacting to America’s election upset:

As poll counting went late into the night, it was Mr Trump’s shock victory in Wisconsin that put him over the 270 out of 538 electoral college votes needed to win the White House.

Minutes after Mrs Clinton called him to concede, the US president-elect took to the stage with his family at his victory rally in a New York hotel ballroom and paid tribute to his rival.

“Hillary has worked very long and very hard over a long period of time, and we owe her a major debt of gratitude for her service to our country.”

He called for Americans to “come together as one united people” and pledged to be president “for all Americans”, after a campaign that saw him hit out at Muslims, Hispanics and other minority groups.

The real estate tycoon, former reality TV star and political newcomer, who was universally ridiculed when he declared his candidacy in June last year, said the work of his “great movement” was just beginning.

“It’s a movement comprised of Americans from all races, religions, backgrounds and beliefs, who want and expect our government to serve the people.”

Donald Trump defied all expectations from the very start of his presidential campaign more than a year ago.

Finally, they said there was no way he could compete for, let alone win, a general election match-up with Hillary Clinton. Now he’s President-elect Trump.

He staged the most unconventional of campaigns, running on gut instinct and his trademark bombast when others – both within his own party and outside – counselled moderation and a pivot to positions perceived to be more acceptable to mainstream voters.

He stayed true to the methods and tactics that got him to the cusp of the presidency, and in the end he was rewarded for it.

Down the stretch Mr Trump boasted that he was leading a movement, riding the crest of a popular revolution that would change the face of American politics. He was right.

Mr Trump has so far won 28 US states. Mrs Clinton, 69, has only notched up victories in 18 US states and the District of Columbia.

New Hampshire and Michigan remained too close to call as of Wednesday morning.

There has been no public comment from the Democratic candidate, who dreamed of becoming the first female US president. She did not appear at what was meant to be her victory rally in Manhattan.

Mr Trump, 70, will take office in January with a Republican-dominated Congress, as Democrats were unable to wrest control of the Senate in Tuesday’s general election.

The populist billionaire provoked controversy on the campaign trail for comments about women, Muslims and a plan to build a wall along the US-Mexican border.

He fired up white, working-class American voters who were angry at the Washington establishment and felt left behind by globalisation.

Mrs Clinton – who held a slim lead in opinion polls going into the vote – saw her campaign dogged by FBI investigations into her use of a private email server as US secretary of state. Last Sunday, the FBI cleared her once again of any criminality.

Nearly nine in 10 black voters and two-thirds of Latinos voted for the Democrat, but more than half of white voters backed the Republican.

In a separate development, Massachusetts, Nevada and California voted to legalise recreational marijuana, which could lead to the creation of the largest market for marijuana products in the US.