The reconstruction of the terminal, as previously reported, is made possible, through the financing arrangements in place by the Government of St. Maarten, the World Bank, the European Investment Bank (EIB) and PJIAE’s bond holders.

PJIAE N.V. and PJIAH are fortunate to be supported in their combined efforts of the Airport Terminal Reconstruction Project by Royal Schiphol Group (RSG), for which a cooperation agreement was entered into between the RSG, MinBzK, PJIAE N.V. and PJIAH. Parties are currently in discussion to extend this cooperation agreement, as it is to expire at the end of July 2021.

With the demolition and mold remediation works now completed, the Airport Terminal Reconstruction Project is progressing steadily, as is the bid evaluation as received on March 23, 2021 for the General Contractor’s package”.

Further reconstruction works related to the renovation project is expected to continue in the third quarter of this year. The reconstruction of the Airport’s Terminal remains a high priority and we are fully committed to rebuilding a stronger and better Princess Juliana International Airport (SXM) for the benefit of all. 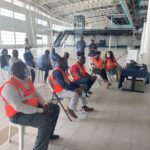