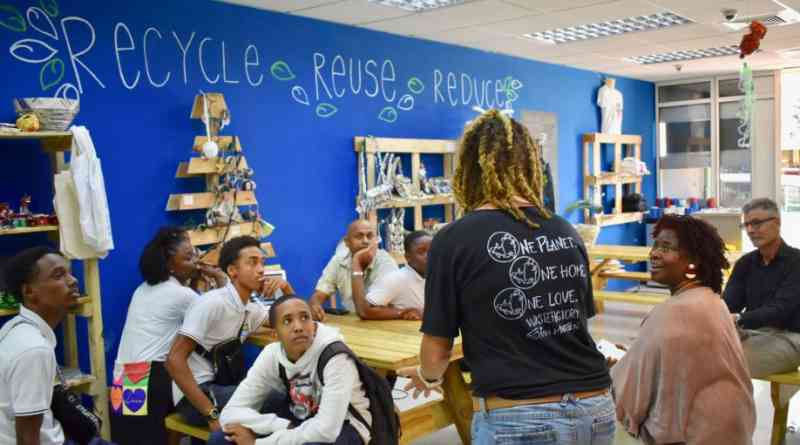 SINT MAARTEN (PHILIPSBURG) – In the coming weeks, close to a hundred secondary school students will participate in anti-looting and anti-littering workshops organized as part of the Too Cool to Loot Campaign. The Waste Factory, a foundation that focuses on recycling and repurposing waste-materials will be leading the workshops themed: Too COOL to Loot and Litter.

In response to the numerous incidents of looting that took place after hurricane Irma in September 2017, UNICEF in collaboration with the Ministry of Education, Culture, Youth & Sport launched its Too COOL to Loot campaign early 2018. The Too COOL to Loot team has been hosting a variety of activities such as educational presentations and debates to bring awareness about the negative effects of looting.

“Initially, our Too COOL to loot messages were primarily geared toward primary school students with a focus on the societal impact of looting and the importance of better hurricane preparedness. With this activity we wanted to engage secondary school students and therefore we decided to expand the message to also include the environmental impact of looting,” explains Suzette Moses-Burton, UNICEF’s community mobiliser.

The first workshop kicked off with students from the St. Maarten Academy PSVE. The 4-hour workshop started with an anti-looting presentation from the TCTL team, followed by an introduction by Tess Verheij, director of the Waste Factory. Tess talked in-depth about the 5 R’s (Refuse, Reduce, Reuse, Repurpose, Recycle) as well as the many upcycling activities of the foundation.

To conclude the presentations by both parties, organizers also briefly touched on the Sustainable Development Goals (SDGs) with emphasis on responsible production & consumption, decent work and economic growth and climate action (SDG’s 8, 12 and 13).

“I experienced the terrible looting after hurricane Irma first-hand. I am happy to team up with Too COOL to Loot to spread their anti-looting message, as well as incorporate my own goal of bringing awareness about reusing waste-materials and the negative effects of littering,” says Tess about the project.

Once the theory segment was completed, it was time to get creative. Students were asked to brainstorm about an activity and design a T-Shirt according to the theme: Too COOL to Loot and Litter. The best activities and connected designs per school will be chosen for screen-printing at the Waste Factory. “I want people to realize that change starts with themselves,” one student shared about his designs that featured a large pointed finger; encouraging persons to think twice about looting and littering.

To conclude the workshops, a mural utilizing the designs from each participating school will be created to remind those passing by that everyone should be: Too COOL to Loot and Litter. For more information on the Too COOL To Loot campaign and UNICEF’s other activities go to: facebook.com/toocooltoloot or facebook.com/unicefsxm