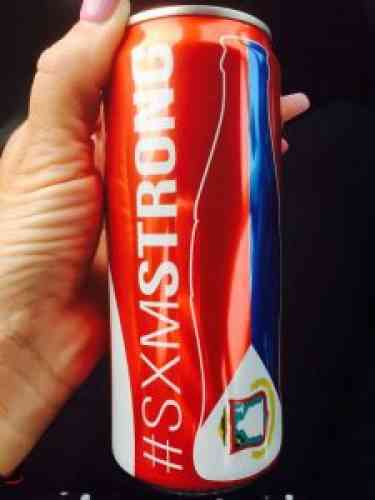 Cay Hill – CC1 St. Maarten, the exclusive distributor of Coca Cola®, has commissioned a Limited Edition 12oz Coca-Cola can for St. Maarten. In the aftermath of “Irma”, CC1 wanted to do something to commemorate the strength and resilience of St. Maarten and its people and so the idea to immortalize the phrase “#SXMSTRONG” on the world-famous Coca-Cola can was born. In addition to “#SXMSTRONG” the Limited Edition can also feature the St. Maarten flag and the iconic Coca-Cola wave is depicted by two hands reaching out to help each other.

On hand to witness the arrival and opening of the first shipped containers were St. Maarten Prime Minister Mrs. Leona Marlin-Romeo and Minister of Education Culture Youth and Sports Ms. Jorien Wuite.

CC1 General Manager Dominique De Tullio presented the government officials with the first “SXMSTRONG “ cans to be offloaded. De Tullio further explained that CC1 together with CCPRB has committed US $0,50 per case sold to be used in helping as many families in need as is possible. The assistance is to cover repairs to dwelling/homes and or assist in getting those in need back on their feet. CC1 Sr. Trade Marketing Coordinator Agnetha Huijting further explained that by the time the campaign is over, she hopes to have raised $10,000 towards this cause.

Consumers can purchase the 2018 Limited Edition SXM Strong Coca Cola® can at major retailers across the island starting the end of January. It is expected that stocks will sell out fast as local patriots snap up “Coca-Cola Limited Edition SXM STRONG “cans. Visitors to the island will no doubt also be on the lookout for these cans as it will be a small effort and gesture in saying “we care, and we want to help”. Coca-Cola SXM STRONG is also a wonderful gift or souvenir to take home.

CC1 St. Maarten is a leader in beverages, beers and spirit distribution on St. Maarten and the surrounding islands. The main office and warehouse located in Cay Hill, CC1 is committed to be an exemplary corporate citizen of St. Maarten. Coca-Cola Puerto Rico Bottlers (CCPRB) is the regional bottler for Coca-Cola, the world’s number one beverage.