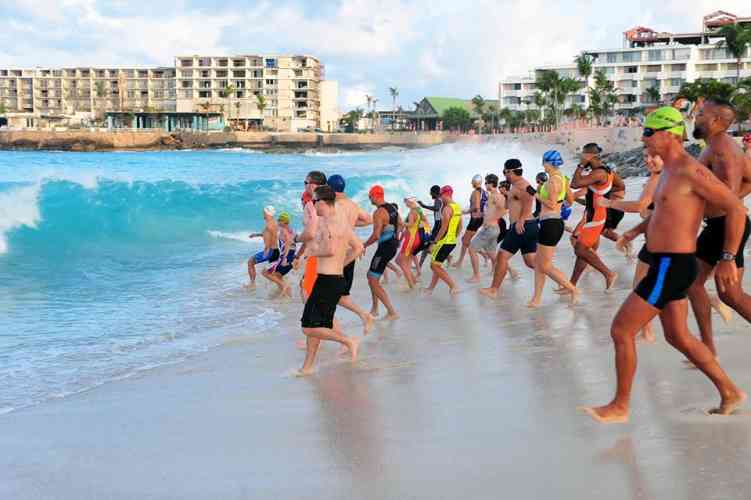 Maho Bay — For the 5th straight year, Gregory Pigeon has proved that he is still a force to be reckoned with when he emerged as the overall winner of the Sunset Triple Mini Triathlon. Joining him on the podium for the grand prize in the female category was Caroline Delplanque.

For the over 55 participants whose ages ranged from 8 to 61, the three stage event was competitive as was to be expected. What made the swimming leg of the event more challenging was the strong ground swell that ran parallel to the beach.

Magalie Merle stole the show in the 40 and over category for women when she recorded an accumulative time of 1:45:56 in the three events. Merle was able to beat Susy Piscione whose time was 1:46:05 followed by the seasoned campaigner Mary Wrigley in 1:46:30.

In the junior category, Clovis Dereeper is already demonstrating that he is an emerging Triathlete when he completed all three races. His accumulative time was 1:45:47 (32,43; 35,50 and 37,14). In the number two spot was Ulysse Dereeper with a total time of 2:02:51. The lone female junior participant was Tamara Merle, she completed two of the races with times of 44,29 and 41,14.

By far the bravest and youngest participant of the day was Liam Denot (age 8) who competed in two races with times of 52,15 and 44,01. Being the first Triathlon of the year, Susy Piscione was able to shed some light on what transpire prior to the hosting of the annual race.

“These kind of events always takes a lot of effort because we always need volunteers as the road events are so fast and short along the airport road,” Piscione said. With regards to the turn out, Piscione said that there could have been more, but ironically, it fell on the same weekend as the San Juan Half Iron Man, which is a very big event.

“We also had to move it to this weekend because last weekend there were too many ships in port and the traffic would have been much heavier. In addition to that, we missed about 15 athletes from St. Barths who would have liked to be here.”

She further attributed the victories in the various categories to the ability of the riders in the treacherous parts on the road especially when the rain fell a bit along with riding through sand and with swimmers who had to be riding the waves and in some cases not being able to see where the Buoys were located.