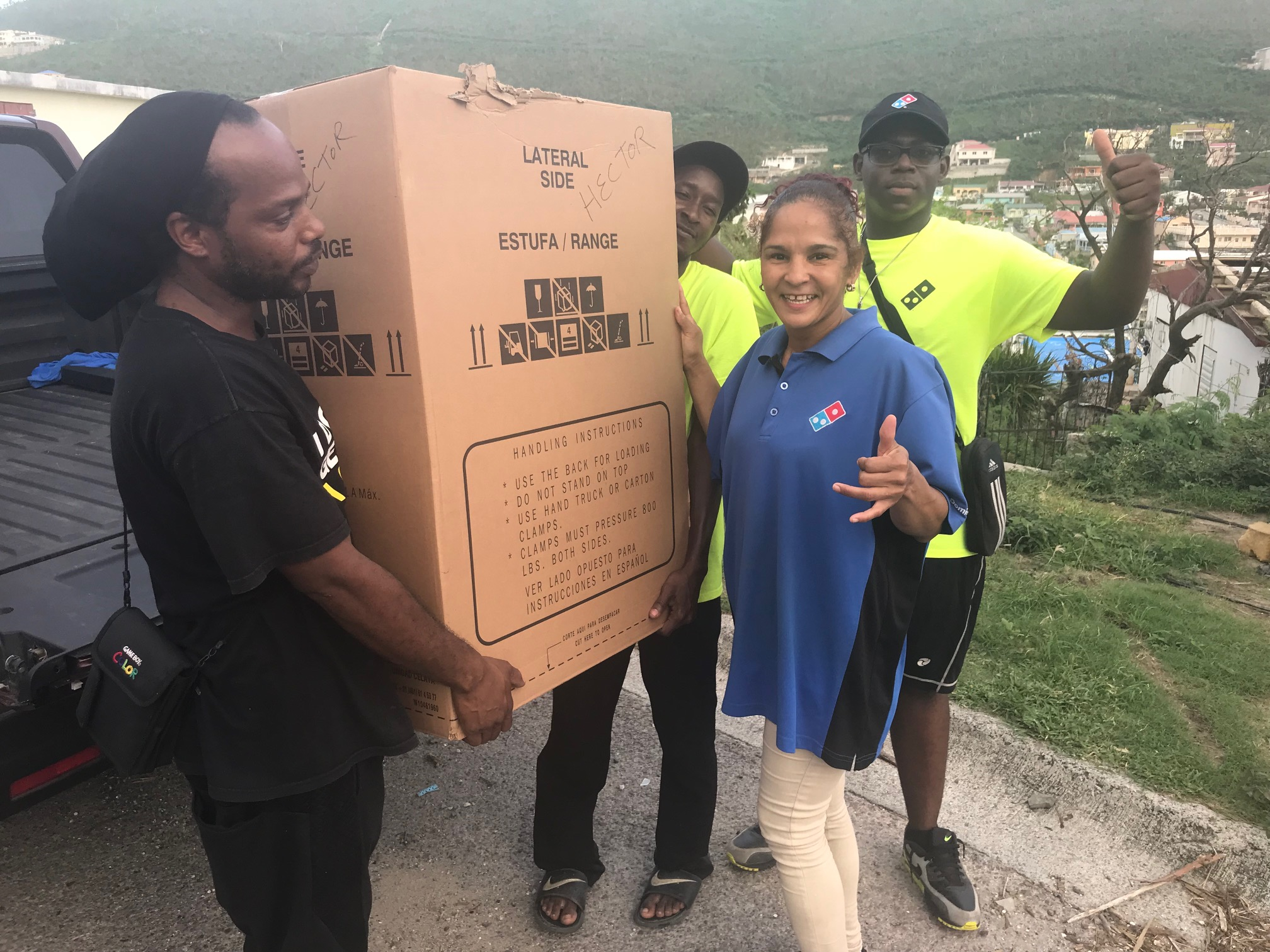 Philipsburg — Domino’s has come to the aid of its own by helping their team members get back some of what was lost in the passing of Hurricane Irma. “All team members’ needs and losses were assessed and through the assistance of the Domino’s Partners Foundation we have been able to replace or repair many of those losses for our 70+ team members,” said John Caputo, Sint Maarten’s franchise holder.

The Domino’s Partners Foundation was the inspiration of many caring team members and franchise owners who felt strongly about “taking care of their own”. Established in 1986, Partners was created to aid Domino’s team members in times of hardship and adversity. The Foundation provides immediate financial assistance to franchise and corporate team members around the world. Financial help is provided following on-the-job accidents, fire or natural disasters, medical emergencies or the death of an immediate family member. Its primary funding comes from a companywide payroll-deduction program. Since inception, Domino’s team members in need have received more than $6 million dollars of financial assistance.

After the passing of Hurricane Irma; the strongest Atlantic Hurricane in history to make landfall on St. Maarten/St. Martin and the media attention that the devastation it caused was seen around the world, many franchisees came together and established a special fund to help those effected. “Just this past June, Domino’s franchise owners from around the world gathered here on St. Maarten for a very successful rally and meeting. While here, they saw St. Maarten at its very best just a few short months ago. It really hit home to many of them when they saw the devastation caused by Irma and the offers of support and assistance for Domino’s team members started to pour in.” Mr. Caputo continued to say.

“Most of our drivers’ cars were inoperable or had damage like broken windshields. We knew in order to get delivery going quickly and to restore their livelihood, these vehicles needed to get back on the road. Beds were the number one loss due to Irma due to the water damage in the house and by working with Beds and Beyond, new bed sets were delivered to most team members. Appliances were purchased at Kwik Bargains.  Broken windows and doors of those that owned their own homes were also replaced.  For a few living in rented property and the landlord not able to replace or repair, agreements are being made to do so on behalf of the team members and then deducted from their rent. Since many team members are still without power, several small generators were purchased and those are rotating with those who are still in the dark. Food vouchers for every team member was also purchased from Le Grand Marche to help them stock back their pantry. “This was especially helpful to the team since we were amongst the first to open and also providing aid and free pizzas to relief workers, most team members were not able to be in the lines for food and water aid distribution,” John continued.

“I have never been more proud to be associated with this great brand Domino’s and all the team and so many others that helped us rebound so quickly after Irma. I cannot thank them enough for their tireless efforts and support.  Hopefully this special fund will help get life back to normal and replace a lot of what was lost. It was also important to us to use the aid money locally as it not only helped our own team members get back on their feet, but also the local businesses we purchased it all from.”

Domino’s is also hiring; especially for delivery drivers. It is a great way to supplement your income, or until many places get back going, to replace that income. Flexible hours and an employer and brand that really believes in putting its people first.